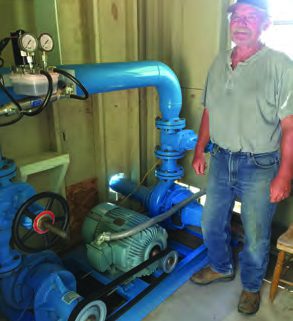 In Western Colorado, there is a group of small-hydro pioneers working with their local electric cooperatives. These individuals re-contextualized a very old and well known concept and are truly transforming the regional and national opportunities for hydropower generation. To successfully develop a small hydro generating system it takes vision, persistence and risk. Three of these pioneers are members of San Miguel Power Association:

Project One: Owned by the city of Ouray and built off an abandoned 6-inch water line that ran through town, this hydro facility is the product of a visionary citizen and former mayor of Ouray, Bob Risch. Up against funding, engineering and construction challenges, Risch’s vision became a community-building, energy-harnessing, money-saving reality.

Project Two: The San Juan Historical Society Mayflower Mill hydro-plant in Silverton. In order to become a legally established generator, small hydro plants such as this one had to tackle onerous federal regulations originally developed for projects like the Hoover Dam. Usually, such regulations become deal breakers for such small systems. But because of the influence and persistence of Mayflower Mill developers like Beverly Rich and Kurt Johnson, federal regulations were drastically improved to make licensing for small hydro projects attainable. New regulations for this and other small hydro projects were established because of their persistence.

Project Three: Located in Nucla and single-handedly developed by Terry Boekhout, this hydro facility came to be despite the risky environment that shrouds nearly every aspect of hydro-electricity generation. Unknown project costs, elusive government and utility incentives, tricky National Electric Code requirements and the utility net metering policy were all obstacles in the development of this small-hydro facility. Boekhout was the glue that kept the construction of the project, including the penstock, the inlet and outlet, the generator house, the overall design of the site, and all the other unknowns, from flying out of control.

While the challenges are many, each project has been made possible through the efforts of these passionate individuals and the cooperation of their local electric cooperative. Each hydro project is vastly unique, but each is also driven by individuals who are willing to transcend the risk move ahead with their vision. This is the true mark of a pioneer.