In July 2019, Tri-State Generation and Transmission Association announced the development of its Responsible Energy Plan. In January 2020, Tri-State divulged its blueprint to eliminate coal emissions from its facilities in Colorado and New Mexico and announced details about its upcoming renewable energy projects.

Coal closures are coming
Tri-State plans to shut down two coal plants and one mine: Escalante Generating Station in New Mexico by the end of 2020, and Craig Station and Colowyo Mine in Colorado by 2030.

Craig Station is in Moffat County and employs 253 people. The 1,285-megawatt plant houses three units — Unit 1 will close by the end of 2025, and Units 2 and 3 will close by 2030. Nearby Colowyo Mine, in Moffat and Rio Blanco counties, produces coal for Craig Station and has 219 employees. Tri-State plans to cease the mine’s production by 2030.

“With 10 years until the closure of Craig Station and Colowyo Mine, we have additional time to work with the legislature, our employees and the communities in Moffat and Rio Blanco counties to plan for and support the transition,” said Tri-State CEO Duane Highley in a recent press release. “Our work starts now to ensure we can continue to safely produce power while working with stakeholders to thoughtfully plan for the future.”

Escalante Generating Station is a 253-megawatt coal power plant in Prewitt, New Mexico, and Tri-State estimates that its closure by the end of 2020 will affect 107 of the plant’s employees. To help ease the burden, those affected “will receive a generous severance package, the opportunity to apply for vacancies at other Tri-State facilities, assistance with education and financial planning and supplemental funding for health benefits,” according to the press release.

Tri-State also announced its decision to cancel its Holcomb coal project in Kansas and not to pursue additional coal-facility projects.

A renewable future
“Today we’re unveiling the results of our Responsible Energy Plan, which will transform Tri-State as a power supplier and put us on a bold path for the future,” Highley said at a January press conference. “The plan allows us to be responsible to our employees, our members, the communities in which they live and work and our environment while still providing reliable, affordable power across the West.”

Tri-State affirms that it wants its electric distribution cooperative and public power district members to benefit from its renewable energy goals. “But we also have a goal to increase our members’ flexibility and ability to generate their own clean energy locally in addition to these large utility-scale projects,” Highley said.

The Tri-State board of directors developed a contract committee with representatives from each of its member distribution systems that is led by San Luis Valley REC director and Tri-State vice-chair Scott Wolfe and Southeast Colorado Power Association CEO Jack Johnston. This committee is making recommendations to the Tri-State board on more flexible contract options.

Highley underscored Tri-State’s obligation to all of its members’ futures, which will result in cleaner air, greater economic opportunity and a cleaner grid. “We’re energized by this even as we try to manage the challenges associated with implementation,” he said. 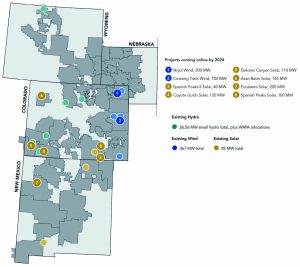 Concern for community
A central part of Tri-State’s Responsible Energy Plan is a focus on working with local community leaders and state and federal officials to gain additional support for employees and communities as Tri-State’s coal facilities are retired.

With New Mexico’s Escalante Generating Station closing by the end of the year, Tri-State will provide $5 million to support economic development and transition needs for communities affected by the transition. In Colorado, Tri-State is engaging with local officials to provide support prior to the closure of Craig Station and Colowyo Mine in the next 10 years.

“My thoughts are with those who live in the communities in and around Moffat County and across northwest Colorado,” Sen. Michael Bennet (D) said in statement following Tri-State’s announcement. “Ensuring the future livelihoods of those affected by this announcement has to be a top priority as this transition plan moves forward.

“Northwest Colorado is extraordinarily resilient and has exceptional leadership. My office stands ready to do everything we can to provide support and assistance throughout this process,” Bennet said.

“We have an obligation to our employees and their communities to ensure a reasonable and equitable and just transition for those affected employees and communities,” Highley said. “We’re committed to working with local, state and federal leaders to look for continued opportunities for retraining and reinvestment in those communities.

“The last piece of our plan involves working together for a brighter future. We’re committed to maintaining rate stability with the goal — and we think it’s an achievable goal — to actually reduce rates through this clean energy transition,” Highley said. “A pretty amazing statement to make that kind of change in our portfolio while also managing costs.”

Amy Higgins is a contract writer for Colorado Country Life. She was a longtime resident of Colorado and she has written on the electric industry previously.