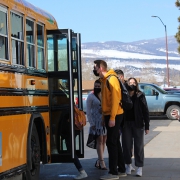 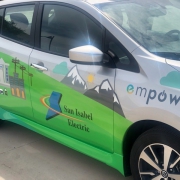 San Isabel Electric, headquartered in Pueblo West, joined the National Rural Electric Cooperative Association and 16 other electric cooperatives to apply for $8 million in federal grants to bring electric vehicles to low-income rural communities. Most of the proposed co-op projects would install public EV charging stations at key locations such as low-income apartment complexes, […]

San Isabel Electric, headquartered in Pueblo West, joined the National Rural Electric Cooperative Association and 16 other electric cooperatives to apply for $8 million in federal grants to bring electric vehicles to low-income rural communities. Most of the proposed co-op projects would install public EV charging stations at key locations such as low-income apartment complexes, […]

Electric school buses are coming to rural Colorado. Not only do they reduce emissions and provide environmental advantages, but electric buses also provide health benefits to riders. Diesel vehicles emit tailpipe emissions linked to asthma, respiratory illness and cancer. Electric school buses do not emit exhaust, entirely eliminating these health risks. That is an attractive selling point when schools think about the well-being of students. 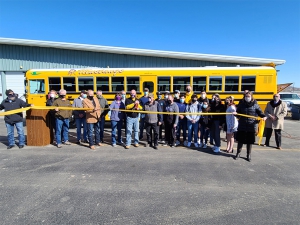 Currently, 95% of the state’s school buses run on diesel, but Colorado’s electric cooperatives are on a mission to change that statistic. Currently three Colorado co-ops, Mountain Parks Electric, in Granby, La Plata Electric Association in Durango and Yampa Valley Electric Association in Steamboat Springs, are trailblazers in providing electric school buses to their communities.

The first all-electric school bus in rural Colorado (and second in the state) made its grand entrance in Kremmling this spring with the help of MPE; its power supplier, Tri-State Generation and Transmission Association; and a grant funded by the Regional Air Quality Council’s ALT Fuels Colorado program. The West Grand School District is now reaping the benefits of switching to an electric school bus. Not only does this mean cleaner and quieter vehicles for students to ride in, but it will also significantly reduce fuel costs.

The small school district already budgeted to replace one of its buses with another diesel bus at a ticket price of $200,000. Although electric buses cost twice that amount — typically ringing in at $400,000 — after qualifying for the RAQC grant and the added contributions from MPE and Tri-State, the district received the bus at no cost. (MPE used capital credits unclaimed by previous members to help fund the new and improved mode of transportation.)

MPE is the first electric co-op in Colorado to help provide an electric school bus to one of its school districts. The electric bus means cleaner air for the entire community. It also saves thousands of dollars a year in maintenance and fuel costs. Currently, the power needed to charge the bus includes more than 30% renewable energy; the amount of renewable energy is projected to grow to 50% by 2024.

MPE spearheaded the funding and support of electric school buses, but LPEA and YVEA are not far behind.

LPEA was set to deliver the next electric school bus as the 2021 school year starts. The Durango School District 9-R received a grant also funded by RAQC to kick-start its project. The grant provided the school district $328,803 to purchase and install a fully electric school bus and related charging infrastructure. LPEA contributed an additional $150,000 to complete the project.

The environmental and health benefits, along with the annual cost savings, are all exciting advantages of securing the electric bus. Like the district in Kremmling, Durango was planning to purchase a new diesel bus to replace an old one in its fleet, but with the financial assistance of the grant and LPEA, it is receiving the bus at no cost to the district.

This particular bus will be the first vehicle-to-grid installation in LPEA’s service territory. LPEA will use a technology called bidirectional charging. This allows the bus to pull electricity from the grid during off-peak hours. But LPEA can reverse that flow and pull electricity from the bus onto the grid during critical times. It’s a win-win scenario for the school district and LPEA.

“The payback of installing this vehicle grid is compelling,” said Dominic May, the energy resource program architect at LPEA. “School buses charge very nicely off-peak. The timing works well with school buses because it avoids the evening peaks, and midday charging sessions also get maximum solar. Furthermore, charging these electric buses only uses one-eighth of the cost of diesel. By installing this grid, LPEA will inevitably make money back each year.”

The project is full steam ahead, and LPEA looks forward to unveiling the new electric bus to the Durango school district this fall.

“We really see the benefits of electrifying many sectors, and transportation is one of them,” said Megan Moore-Kemp, energy solutions manager at YVEA. “Some of the benefits of electric buses to our citizens is that they do cost less over the long term; they’re less expensive to charge, fuel and maintain than gas-powered vehicles; and they cut emissions.”

When the Hayden School District approached YVEA about its plans to apply for the RAQC grant, YVEA happily wrote a letter of support. The co-op collaborated with the school board from an innovation standpoint, offering specifics on what a fair electric rate would be and exploring what infrastructure costs would look like. “YVEA believes this is a very important project and we were happy to collaborate with our partners to achieve their clean energy goals,” said Carly Davidson, public relations specialist at YVEA.

This is just the tip of the iceberg for electric buses in the state as other electric co-ops work toward bringing electric school buses to their communities. These electric vehicles will provide environmental and financial benefits to Colorado schools. Colorado’s electric co-ops are excited to be leaders in the process.