Every June more than 1,800 high school students from towns and small cities in rural America spend a week in the nation’s Capitol as part of the National Rural Electric Youth Tour. The students are sponsored by electric cooperatives – cooperatives who are committed to educating America’s rural youth about America and the role electric cooperatives play in developing strong rural communities.

Colorado Youth Tour participants begin the tour in Denver where they learn about Colorado’s state government and Colorado’s cooperatives. From Denver, they fly to Washington, D.C., where they attend educational seminars and visit with their representatives in the House and the Senate. Students also visit historic sites in Washington, D.C.: the Lincoln Memorial, Mount Vernon, Arlington Cemetery, and the Smithsonian, just to name a few.

Participating in the Youth Tour is a great way to learn about this great nation, develop leadership skills, gain a better understanding of electric cooperatives, and make friendships with people from across the state and country.

Senator Lyndon Johnson inspired the Youth Tour when he addressed the NRECA Annual Meeting in Chicago in 1957. The senator declared, “If one thing goes out of this meeting, it will be sending youngsters to the national capital where they can actually see what the flag stands for and represents.”

Consequently, beginning in 1957, some of the Texas electric cooperatives sent groups of young people to Washington, D.C., to work during the summer in Senator Johnson’s office, to learn more about government in action. In 1958, rural electric cooperatives in Iowa sponsored the first group of 34 young people on a week-long study tour of the nation’s Capitol. Later that same year, another busload came to Washington, D.C., from Illinois. The idea grew and other states sent busloads of young people throughout the summer. By 1959, the Youth Tour had grown to 159 youths.

In 1964, NRECA began to coordinate the program and suggested that co-op representatives from each state arrange to be in Washington, D.C., during Youth Tour week. The first year of the coordinated tour included approximately 400 young people from 12 states. The idea has continued to grow and today over 1,800 young people and chaperones participate in the Youth Tour every year. 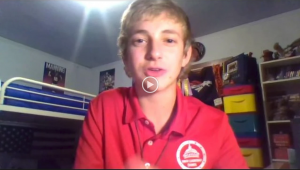