Blog
You are here: Home1 / Blog2 / Colorado Country Life3 / Energy Connections Articles4 / Combustion to EV: A Race for the Top

Electric vehicles are multiplying on our neighborhood streets and highways, but they’re also generating more interest in a less likely arena: racing venues. When we think of car racing, we think of the growl of the engine, and the lingering scent of gasoline and oil. However, many of today’s race car drivers and their fans are becoming more accepting of change.

The Pikes Peak International Hill Climb is a time-honored competition that was established in 1916. Dubbed the “Race to the Clouds,” this 100-plus years race course goes up the iconic 14er, taking competitors through 156 twists and turns with treacherous cliffs marked with behemoth boulders and towering trees, climbing 14,115 feet to the finish line. This race isn’t for amateurs. 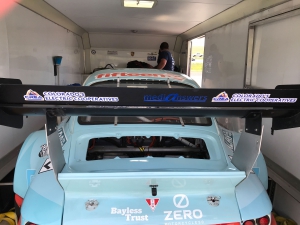 Colorado’s Electric Cooperatives sponsor the 1973 Porsche 911-converted EV at its debut in the PPIHC.

While many EVs have entered this climb over the decades, none were as cutting edge as one of this year’s exhibition vehicles: a 1973 Porsche 911 RSR EV. On June 30, it was the first former Pikes Peak competitor and winning car (the car won the vintage division in 2015) that turned heads with its internal combustion conversion to EV using California’s Zero Motorcycles’ EV powertrain. The vehicle was driven by Winding Road Adventures (WRA) Racing’s Chris Lennon of Monument.

Colorado’s electric cooperatives showed their support for this progressive venture with a sponsorship of the vehicle. “The electric co-ops are excited to be part of this project which delved further into electric vehicles and what their potential is,” said Colorado Rural Electric Association Executive Director Kent Singer.

Devotees and the debut
“We all call this ‘Hell Week,’” Lennon said in the week previous to the race. The WRA crew was busy testing the Porsche every morning at first light that week, before the tourists made their presence known. “We test on a different part of the mountain every day this week to find out how the car is working and try to get it in tip-top shape for the race.” 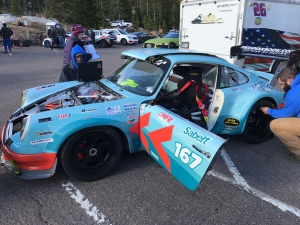 Winding Road Adventures’ crew tests the EV Porsche every morning the week before the race.

In the months prior to the race, the WRA crew was diligently transforming the Porsche into the handsome EV it is today. “We literally updated everything as part of the EV conversion,” Lennon explained. “From the chassis itself — we beefed it up — we put a whole new suspension on it, the weight distribution in the car is different, new brakes, new wheels. It’s literally like a brand-new car.”

The Porsche made its initial appearance at the PPIHC Fan Fest in downtown Colorado Springs on June 28, where tens of thousands of fans met the racers displaying their race cars. Right next to Lennon and the Porsche was a Honda EV that was driven by Katy Endicott in 1994, giving race fans a comparative taste of what a state-of-the-art EV looked like 25 years ago.

Counting down the hours to the actual race, WRA knew Lennon and the Porsche were ready to make their debut at their first PPIHC. “It going to be a great adventure either way,” Lennon said. “I’ve learned over the years — over the six years I’ve run previously — that there’s been bad weather almost every year. But that’s out of our control and we just kind of deal with it.”

Setting the pace
Call it kismet or simply Colorado — June 30 brought in storm clouds, rain pelted the pavement and Lennon wasn’t surprised. “The weather is always a factor there,” he reiterated. “What made it a little more unusual was the fact that there was lightning up there. After that, they stopped sending cars to the summit and the rest of us went to Glen Cove, which is as far as they could send us safely.”

PPIHC officials examined and calculated partial runs and full runs to decide who was the fastest in the race. In the end, Lennon and the modified Porsche made it to the podium with a third place finish in the exhibition division. 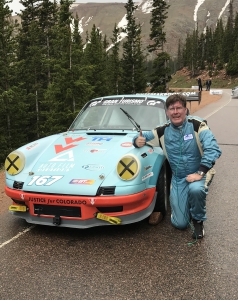 Lennon and his converted EV at the PPIHC.

“We think we could have gotten second place if we could have gone to the summit, but you never know until you do it,” Lennon said. He was impressed with the Porsche’s performance, “because the second place car had a lot more power than we did. It was the internal combustion technology with the Dodge Hellcat with a massive amount of power, and we had electric.”

Lennon liked the immediate availability of power the EV provided and was impressed with the powertrain, noting that it seemed to like the cooler temperature. When he reached the modified finish line, the Porsche still had about 50% charge remaining.

Even during the race, Lennon was discovering the particulars of the vehicle. “It took a little quick learning on my part, because we were doing it in the rain where maybe having all that power right away wasn’t the most controllable thing, but I was a quick study, I think,” he explained. “There was one point past one of the big spectator areas at the ski area where I came around the corner — I tried to be as gentle as I could on the accelerator, but the car got really sideways and even through my helmet I could hear people screaming outside. I think it was a fan favorite that I went sideways in front of all of them. It was definitely not intentional though.”

Already committed to the 2020 PPIHC, the WRA engineers will be reviewing the data from this year’s race to ensure they’re even more prepared to hit the hill once again.

A global influence
WRA wasn’t certain how the Porsche EV would perform at PPIHC, so landing a spot on the podium was the icing on the cake. “There’s no question we went in the right direction going EV this year — we got a terrific result,” Lennon said. “Again, with this being the first year of a two-year effort, we expect to learn a ton from this and come back even better next year.”

As an internationally loved event — one of the top four or five races in the world, Lennon said — PPIHC is an ideal platform to show off classic cars that are modified with modern technologies. “I suspect we’re not going to be the last ones to do this,” he said.

“I would have also thought that the racing world would be the last to really embrace this because they’re more traditional car people,” Lennon said. “I think that community is one of the tougher ones to win over with EV.”

Fans of the PPIHC may breathe in a little less gasoline and hear a little less growl at future races as more EVs make it to the scene and race their way to the clouds.

Amy Higgins is a longtime freelance writer for Colorado Country Life. She’s wise to the ways of the electric cooperatives’ diverse communities and is enthusiastic about engaging the CCL readership by reporting the latest innovations in energy.