With the proliferation of electric vehicles, it’s becoming a priority to ensure these drivers can stay “fueled” when traveling. Range anxiety is a term used to describe the concern an EV owner has about the vehicle’s battery running out of charge before reaching a charging station. A recent AAA study showed that 57% of people are unlikely to purchase an EV because of range anxiety.

To lessen that unease, more states are offering incentives for local consumers, businesses and utilities to install EV charging stations. There are currently more than 21,000 EV charging stations in the United States, 701 in Colorado as of mid-May. Many more are in the works and Colorado’s electric cooperatives are in the mix. 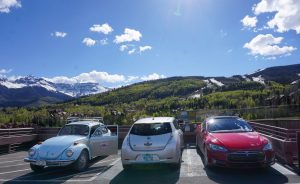 With offices in Nucla and Ridgway, San Miguel Power Association has a lot of experience with EV drivers. The first EV charging station in the cooperative’s region in southwestern Colorado was powered in 2014 at the Gondola parking garage in Mountain Village above Telluride. Since then, more public and semipublic charging stations have popped up in the area, some of which SMPA helped with financially, including the Ridgway charging station. 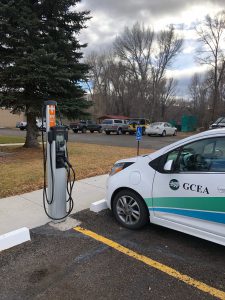 In November 2015, Gunnison County Electric Association installed its first EV charging station. It currently owns and operates six stations and is looking for a location to install a DC (direct current) fast charger in its territory. GCEA Member Relations Supervisor Alliy Sahagun explained, “We see that as an opportunity to decrease range anxiety even further and give EV drivers in our area an opportunity to travel longer distances, as well as encourage visitors to bring their EVs to our area when they come to enjoy all the recreation the Gunnison Valley has to offer.”

Pueblo West-based San Isabel Electric Association partnered with Charge Ahead Colorado, the Pueblo City-County Library District, Pueblo County, Bank of the San Juans and the Pueblo West Metro District to install its first EV charging station in December 2018. The Pueblo County Energy Office received grant money through Charge Ahead Colorado and then all the organizations invested their time, energy and expertise to raise the additional funds. “This really wouldn’t have been possible if it wasn’t for the community coming together to get this done,” said SIEA Communications Manager Paris Elliot. 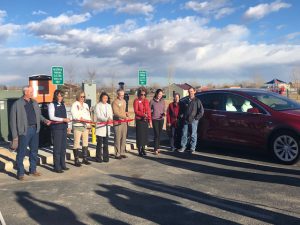 SIEA holds a ribbon-cutting ceremony for its new charging station.

Conveniently located at the Pueblo West Library along the Highway 50 corridor, the new charging station has both a Level 2 and Level 3 charger. Additionally, SIEA is installing two more charging stations at its office: one for public use and the other for employee use.

La Plata Electric Association currently owns two Level 2 charging stations installed at the cooperative’s headquarters in Durango, and there are several private stations in the area to which the cooperative sells power, including at the Smiley Building, Mercy Medical Center and the city of Durango Transit Center. In January 2019, the Pagosa Springs Town Council approved installing a Level 2 charging station at Pagosa Springs’ Centennial Park. New DC fast chargers will be installed in Durango and Pagosa Springs within the next year. 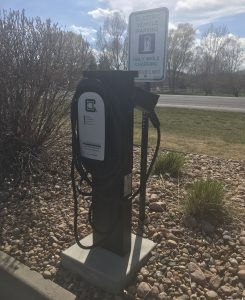 A charging station is ready for EV owners in PVREA’s territory.

In 2013, a partnership between the Regional Air Quality Council and the Colorado Energy Office formed Charge Ahead Colorado to encourage EV adoption by providing grants for EV charging stations. As of January 2018, the program awarded grants to more than 600 stations across Colorado, according to the Colorado Electric Vehicle Plan.

Charge Ahead Colorado funds up to $9,000 for Level 2 chargers and $30,000, or 80% of project costs, for DC fast chargers, according to Program Manager Zachary Owens. The remaining balance is the responsibility of the applicant.

EV drivers pay a $50 annual registration fee for their road usage charge and gas tax; $20 of that fee goes to Charge Ahead Colorado to build charging infrastructure. “The idea of that is folks driving conventional vehicles are paying a gas tax,” Owens explained. “The registration fee was designed so that EV drivers are paying their fair share as well.”

EVs are touted as more environmentally friendly than conventional vehicles and, depending on what type of charger you have and where it is located, could also have economic benefits for the community. If the charger is located near a shopping center, for example, EV drivers can spend time and money at the shops and restaurants while their vehicle charges.

The upcoming Centennial Park Level 2 charger project in LPEA’s territory is “an optimal location for those utilizing the service to shop, walk and dine in the area,” LPEA Energy Management Advisor Nancy Andrews explained. A Level 2 charger can take up to a few hours to charge an EV, which makes an area such as this desirable to EV owners as they bide their time.

While some electric co-ops do not own an EV charging station, some are helping others in their community to do so. For example, Granby-based Mountain Parks Electric’s Green Power program contributed to charger installations in its community. Also, SMPA made a donation of $2,000 for the Ridgway project; the co-op has $4,000 allocated every year for this purpose.

Several Colorado co-ops offer significant rebates for EVs and/or EV chargers, including PVREA, SIEA, SMPA and LPEA. Although Cortez-based Empire Electric Association does not own any EV charging stations, its board has approved rebate opportunities and EEA will market the program as soon as the campaign is finalized.

“Another creative idea we have is to promote our EV home charger rebate with property management companies and homeowners associations to offer EV charging as an amenity for those booking stays in the short-term rentals,” Sahagun said. “This will benefit the consumer-members by taking advantage of the rebate in their efforts to draw more people to their rentals and be a point of distinction in their offerings.”

The forecast shows that EVs are here to stay, and all of Colorado electric co-ops are taking notice and getting involved in whatever ways work best for each local co-op.

Some co-ops don’t have the population to support a charging station. In other areas the charging stations are maintained by other entities. Each co-op is learning and moving forward in a variety of ways. All of Colorado’s electric co-ops are planning for the future and working to lessen the range anxiety for their consumer-members while meeting their electricity needs.