Blog
You are here: Home1 / Blog2 / Colorado Country Life3 / Energy Connections Articles4 / The Battle Behind Keeping the Lights On

Did you know squirrels, lightning and trees have something in common? They can all knock out your electricity.

Electric cooperatives across Colorado and the country work hard to keep your lights on all the time, but “you’re going to have power outages, and that’s just the way it is,” says Tony Thomas, senior principal engineer with the National Rural Electric Cooperative Association.

An electric utility’s basic job of keeping the power flowing 24/7 calls for maintaining a complex network of power plants, poles and wires, but it also means battling the unpredictable. Thomas cites the top three troublemakers to electric reliability as trees falling on power lines and other interferences from vegetation, lightning strikes and animals going about their daily routines, especially squirrels chewing on electrical equipment.

“Utilities do an awfully good job, but Mother Nature gets in the way sometimes,” Thomas says.

Statistics say the lights are almost always on
Numbers collected from electric utilities show that power in the United States is incredibly reliable. According to these figures, the percentage of time that the average American has electricity at the flip of a switch is 99.97. Thomas says what’s most important to know about that number is that it doesn’t change much.

“I don’t see big swings from year to year,” Thomas says. “If things are fairly consistent, that means the utility is operating about as efficiently as it can.” 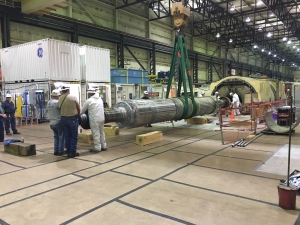 When it comes to electric reliability, the biggest challenge is maintaining and updating the massive machinery of the nation’s electric grid. More than 8,500 power plants generate electricity that is shipped through 200,000 miles of high-voltage transmission lines.

But utilities still try to improve on that reliability. Among the techniques being used to foil critter catastrophes are snake barriers around substations, buzzard shields on transmission towers and mesh coverings on wood poles to protect them from woodpeckers.

For some of the other causes of outages like trees and lightning, there’s now an app for that.

Utilities operate extensive right-of-way programs to keep vegetation away from power lines, from clearing underbrush to publicity campaigns asking people not to plant trees where they can fall on power lines. These days, those efforts can be aided by digital software that forecasts the growth of trees and other plants so utilities can recognize when to prune branches before they cause a problem.

Other software tries to manage lightning by analyzing the age and wear on the utility’s equipment that minimizes the damage from lightning strikes so it can be replaced before it fails.

While Colorado’s electric co-ops fight storms and squirrels to keep the power on, by far the biggest part of reliability comes from the decades of building, maintaining and updating their part of the massive machinery of the nation’s electric grid. In Colorado, a variety of power plants generate electricity that is shipped through miles of high-voltage transmission lines. Banks of substations and transformers step-down that voltage to send it to homes and businesses through an estimated 100,000 miles of local distribution lines.

Keeping that network up and running calls for a lot of planning among utilities to anticipate how electricity will be used in the future. Part of that reliability planning has focused on protecting the electricity system from computer-based digital attacks.

The never-ending job of cybersecurity
Bridgette Bourge is among those overseeing how digital technology affects reliability for electric co-ops and their consumer-members. As director of government affairs for NRECA, she sees both the positives and the negatives to the latest internet-based, or cyber, technology.

“Cyber helps a lot on reliability because it gives us the ability to monitor and know everything right away,” she says. “But whenever you increase reliability through a technology, you do potentially open up vulnerabilities as well from the security angle.”

For any organization, including electric utilities, the benefits of the internet come infested with mischief makers. Bourge says it’s routine for a company to receive tens of thousands of attempts each day to break into its computer network. Those “knocks” at the cyber door can come from individuals, countries and organizations, or from the army of automated “bots” roaming the internet worldwide, testing for weaknesses where a hacker could enter.

For a utility, a troublemaker inside the computer network could affect electric service, and that’s why local electric cooperatives work with their national organization, NRECA, to organize a variety of cyber reliability programs.

Bourge says those cyber reliability programs aim to help protect against a range of threats, from broad attempts to shut down parts of the electric grid, to more focused efforts to corrupt pieces of software used by electric cooperatives.

NRECA is also part of a national program to create a cyber mutual assistance agreement. Much like how groups of lineworkers from an electric co-op travel to help restore power after a hurricane, these cyber agreements would utilize teams of information technology experts in the case of a cyber incident.

“You can’t solve cybersecurity,” Bourge says. “No matter what you do today, the bad guys are going to figure out a way around it tomorrow. You have to keep thinking about the next step.

Electric co-ops are well-placed to pay attention to cybersecurity. She says that as community-based, member-led businesses, electric co-ops have a unique interest in protecting the reliability of the local community’s energy supply. Co-ops are prepared to act quickly when lines are down and work hard to thwart cyberattacks as they battle to keep the lights on.