Just as rural Colorado started to regain footing from the stressful economic and emotional impacts of COVID-19 shutdowns, wildfire season erupted with force across the central and western parts of the state in late July.

Electric co-op communities such as Glenwood Springs and rural areas of Mesa and Garfield counties, Grand County and Larimer County were impacted at once when three large fires started burning within days of each other. All attention was quickly directed at keeping people, property, livestock and electric system infrastructure safe from extreme fire situations and damage. Countless evacuations and road and area closures brought the state to a halt. Interstate 70 was shut down through Grizzly Creek Glenwood Canyon for an unprecedented two weeks in August. 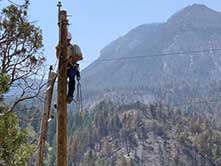 Hot, windy and dry weather created the perfect storm for what would become the largest fire in Colorado’s recorded history: the Pine Gulch Fire on the Western Slope, burning in Grand Valley Power’s service territory. As of early September, the Pine Gulch Fire had burned over 139,000 acres and was 81% contained. The Williams Fork Fire in the Mountain Parks Electric service area was also burning with little containment progress. The Cameron Peak fire affected both MPE and Poudre Valley Rural Electric Association service territories, doubling in size over Labor Day weekend before 14 inches of snow gave firefighters a chance to try to get ahead of it.

COOPERATION AMONG AGENCIES
For every agency working on the front lines to fight fires, there are countless more supporting suppression efforts. Colorado’s electric cooperatives work tirelessly with emergency personnel to keep consumer-members safe and informed in all of these active fire situations.

PVREA’s Vice President and Chief Operations Officer John Bowerfind, said the Fort Collins-based co-op is working closely with the Cameron Peak Fire incident command. “There are daily virtual meetings on the fires to get updates, to find out where the fire moved during the last day, where it is projected to move, where they are clearing out areas and if there are any utilities they’re concerned about,” Bowerfind explained.

GVP’s connections with public agencies were essential. “GVP has great relationships with the counties involved, so we know everything that is going on. Our relationships with Mesa County and emergency management are crucial in getting timely information to members,” Communications Specialist Dana Pogar said. GVP Operations Manager Bill Barlow and Pogar attended community briefings held by the Rocky Mountain Incident Management team. “We were able to speak to the community about fires and electrical safety, and what the restoration efforts would look like once evacuations were lifted,” Pogar said.

MPE Manager of Operations Rich Trostel participated in daily cooperators meetings in Grand County for the Williams Fork Fire, which was only 10% contained in early September. Once the fire stopped being a threat to any housing developments, those meetings turned to daily email updates to give the size of the fire, forecasts, how many people are working to suppress the fire and other pertinent details.

PREVENTION STARTS EARLY
The co-ops’ focus on wildfire threats, however, started long before the first flames ignited. Co-ops work year-round on vegetation management, which removes brush and trees near power lines. This is so that if a power line snaps for some reason, that line is less likely to ignite a fire in nearby vegetation. However, not all vegetation management procedures are easy since co-ops are often dealing with rugged terrain and various rights-of-way from private and public land managers.

Trostel recalled that prior to 2006, the pine beetle epidemic killed quite a bit of forest around Grand County. “There were so many dead trees close to line, so we were in crisis mode getting rights-of-way cleared.” The Granby-based electric co-op hired several contractors and cleared all 214 miles of power lines that had trees associated with them.

In 2017, MPE tested a mowing program where it cut the right-of-way to the ground and stopped vegetation and tree growth. Although an economical way to clear rights-of-way, the mowing system had limitations in steep and rough terrain. MPE also had issues with aspen trees growing back thicker than before and, in some cases, multiplying, so the co-op’s tree contractor tried an herbicide test plot in 2018. Trostel said that the co-op went back this spring to look at the test plot.

“All broadleaf trees are dead, but the low ground cover is thriving,” he said, “and this is more economical than a crew going into remote forest areas to cut down trees.” MPE consumer-members are usually agreeable when they are asked to cut down trees or have vegetation cleared from around power lines and poles on their property because they understand the risks if they don’t.

GVP is also consistently looking at lines and their proximity to trees and vegetation as crews drive around the service area. Barlow explained that GVP crews go circuit by circuit in most cases. “The co-op has a dedicated patrolman looking at trees and lines,” he said. Consumer-members are also involved. According to Barlow, many GVP consumers request that the co-op come to assess vegetation and trees near lines, and he said GVP will coordinate outages where trees near lines need to be trimmed.

CO-OPS TAKE ACTION DURING FIRES
Once an actual fire starts, the co-op is hypervigilant. When the Cameron Peak fire broke out in Larimer County, PVREA immediately worked to protect its infrastructure and power poles that were in the path of fire and considered most in danger. The Fort Collins-based electric co-op covered poles with fire wrap material. “We wrapped the bottom 8 feet of the pole from where they go into the ground, which we believe will help if it’s a smaller brush or grass fire,” Bowerfind explained.

“We get daily maps from incident command, and we overlay that onto GIS [geographic information systems] to see where lines are in relation to the daily fire growth. Based on daily direction of growth and wind, it alerts us to if there are areas we need to be concerned about,” Bowerfind said.

We prepare, wait and respond,” he stated as the Cameron Peak Fire stabilized during the first week of September. 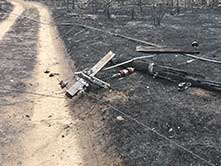 As Poudre Valley REA crews were able to access areas where the Cameron Peak Fire had burned, they found poles and lines totally destroyed.

During wildfires, co-ops keep the power flowing as long as it is safe to do so. But, according to Colorado Rural Electric Association’s Safety and Loss Control Director Dale Kishbaugh, “Every time [emergency crews] think they have a grip on the fires, the winds change or something else happens” that makes fire suppression efforts even more difficult and unpredictable. That’s why co-ops are on standby and in constant communication with emergency management teams, ready to de-energize power lines and equipment when called upon to do so. “Our first concern is everyone’s safety,” Trostel explained. “We will take out power if [the fire] gets too close to lines and infrastructure.”

When GVP turned off power during evacuations, it was due to orders from the emergency management officials, Barlow said. When co-ops de-energize lines, they are typically able to alert members by having up-to-date outage maps on the co-op website, sending text alerts, posting social media alerts and sending alerts through co-op apps. “Members in GVP’s service area were supportive of the co-op’s, outages and understanding of the situation to cut off power for the safety of the community, first responders and GVP crews,” Pogar said.

PVREA Vice President of Member and Government Relations Amy Rosier talked about a variety of methods PVREA used to communicate with its members during the fire. Although PVREA had not turned off power to any consumer-members as of the first week of September, when the fire started, the growth was rapid. “We set up a landing page on our website dedicated to the Cameron Peak Fire,” she said. Social media has also been a large part in its communications plan. But the co-op took preparations one step further. “We worked with predictions on who could possibly be impacted,” Rosier said. “If it does look like there will be outages, we could act quickly” to alert consumer-members of outages. 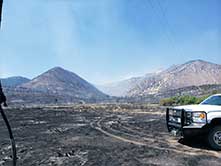 The Pine Gulch fire is on record as the largest wildfire in Colorado, burning over 135,000 acres. It caused extensive damage across the Western Slope. Photo by Bill Barlow, Grand Valley Power.

RECOVERY
As Pine Gulch Fire evacuations lifted in GVP’s service territory, co-op crews had to visually inspect poles and lines in those previously evacuated and burned areas. “We have to look at everything; you don’t know how intense the fire was,” Barlow explained. “If you had big flames, did it weaken a conductor? You have no idea if poles were burned in half. We went house to house to look at the facilities, to shut off breakers, to look at everything” in order to keep consumer-members and their property safe once the power was restored.

Pogar said the process in which the co-op communicated with members and the community after evacuations were lifted was systematic with safety at the forefront. “We mailed a packet explaining restoration efforts. In the packet, we included a safety information page on how members can safely restore power in homes after a wildfire.” The sheriff’s department also distributed GVP’s safety information to residents as evacuation orders were lifted. “[GVP Operations Supervisor] Mark [Shaffer] and Bill [Barlow] even went door to door in many cases to talk to members not only about their power being off, but to inspect member homes and meters that GVP is responsible for,” GVP Communications Manager Christmas Wharton said.

The physical damage to property and infrastructure was minimal for GVP during the Pine Gulch Fire. “When we were looking at the potential for damage, we were looking at losing upwards of 300 poles plus having 70 consumer-members out of power or, even worse, lose homes,” Wharton said. Early on, there were intense discussions on what to plan for. “Our geographic information systems analyst and engineering department were valuable in planning on what to expect. They laid the fire path map over GVP’s mapping system to see specifically what lines were going to be affected and to count how many poles could be destroyed,” she said. However, as of early September, GVP had lost only four poles and a little bit of wire, according to Barlow. “We have huge thanks for Mesa and Garfield counties and all agencies taking such special time and efforts to protect not just homes, but facilities, poles, equipment and oil and gas,” Barlow said.

MPE had more damage in its area, having lost about six structures. “The damage is in very remote, very hard-to-get-to areas, with no roads and trails,” Trostel said. “It’s steep and inaccessible, so all repairs will be done by helicopter work or a hike to each pole.”

At magazine deadline, PVREA was assessing the damage to its infrastructure.

Total damage and statistics from all of the fires have not been finalized by the time of publication. Kishbaugh and CREA advise electric co-ops on long-term recovery impacts, what is needed to work with state emergency management and how to coordinate with the Federal Emergency Management Agency for any funds needed to repair and replace burned infrastructure. A task force Kishbaugh is included in looks at what the devastation will be after the fires. Fires affect the watershed, drinking water and the environment and can cause burn areas to be greatly affected by flooding because the forests simply won’t have the chance to recover immediately.

GVP believes its community will be stronger than ever after the Pine Gulch Fire. “Our community is awesome and supportive of each other. We’re in this together and we’re going to get through it,” Wharton said. So, too, will all of these fire-stricken areas where their local electric co-op is an integral part of the coordinated effort to protect their communities.