Blog
You are here: Home1 / Blog2 / Electric Industry News3 / The Super Grid: The Path to Wealth on Renewables?

But just 100 miles or so to the east of the co-op’s Glenwood Springs headquarters, the Front Range and eastern plains offer ample wind resources. And the states to its south are among the nation’s solar power leaders.

“Our transmission access is our biggest worry” for meeting the 100% goal, he says.

Hannegan, who served as associate director at the U.S. Department of Energy’s National Renewable Energy Laboratory before joining Holy Cross, sees a solution in the creation of a “super grid.”

The concept, also known as the macro grid, entails uniting the nation’s regional transmission systems with high-voltage, direct current (DC) interties. In particular, it would bridge the seam that runs along the eastern borders of Montana, Wyoming, Colorado and New Mexico between the western and eastern grids and would also tie ERCOT, the wind-rich Texas grid, into a national system.

While at NREL, Hannegan oversaw a study that found a super grid could help reduce costs for consumers by allowing a “balancing of power supply over much larger regions,” he says, “allowing us to harness the resource diversity we have in this country.”

In particular, it would enable greater use of wind and solar power, says Tracy Warren, director of the Macro Grid Initiative at the American Council on Renewable Energy.

“Much of our vast renewable resources are located in remote regions far away from where the power is needed in population-dense areas,” she says.

Being able to move solar and wind power to those areas could increase the utility of renewable generation. One scenario outlined in a study showed a hypothetical heat wave in August causing air conditioners to drive up demand. As the sun moved across the United States, solar plants in the West sent power eastward, limiting the need for expensive peak-load, fossil fuel generation. As the sun moved west and began to set, midwestern wind farms — today in the eastern grid — sent power westward to relieve pressure on the coast’s coal- and gas-fired generation.

Worth the cost?
The price tag for building the DC transmission necessary to create a coast-to-coast super grid would be eye-popping: The NREL study estimated it could cost at least $80 billion, but it could return economic benefits of twice that amount.

“By every measure, a more interconnected grid delivered better outcomes — lower carbon emissions, lower cost to consumers, better reliability,” says Hannegan, along with job creation and other economic benefits in the parts of the country where more renewable energy generation would be built. 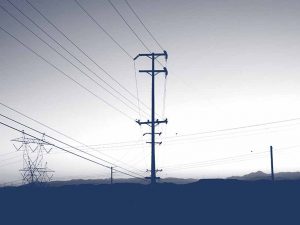 But a super grid would also face significant challenges.

“Any transmission beyond a local, minimal addition to an existing line is going to be met with huge amounts of opposition,” says National Rural Electric Cooperative Association Chief Engineer Paul McCurley. “Not just technical, geographic, economic and environmental challenges but many not-in-my-backyard battles.”

Patti Metro, senior grid operations and reliability director at NRECA, says DC interties and converter stations for the three alternating current (AC) grids, which are not synchronous, would be complicated and expensive but would not require new technology.

Much of the recent focus in the industry has been on reducing, not expanding, the distance power travels, turning to more localized, distributed generation that integrates renewables sources like solar and tends to reduce the need for new transmission facilities, Metro says.

Another issue is the allocation of costs. Basin Electric Power Cooperative, a co-op power supplier based in North Dakota, operates coal, gas and wind generation to serve 140 member systems, including Colorado’s Tri-State Generation and Transmission Association, which serves 17 of the state’s 22 electric co-ops. As the demand for power grows, “new transmission development is probably going to be essential, and if there’s a transition to more renewable energy, that’s only going to add to the demand,” says Tom Christensen, Basin’s senior vice president for transmission.

But, he adds, the construction cost of a super grid raises concerns, even if it eventually saves money.

“Regardless of who funds it — banks, utilities, whoever — the point would be that, ultimately, some set of retail customers will have to pay. It will show up in customer bills,” he says.

Rural, sparsely populated areas like the Great Plains, where wind generation is expanding, should not be asked to bear costs that exceed the benefits to their region if the transmission is largely carrying the power elsewhere, Christensen says.

He notes the super grid would require unprecedented coordination on a national scale to make sure the connections were cost effective, a task that’s generally handled by regional transmission organizations (RTOs).

“In general, when it’s transmission planned by an RTO, you really get a cost-effective solution, and you hopefully get an equitable distribution of cost to consumers,” he says, but a macro grid would cross RTOs, complicating planning.

He could see starting a buildout of regional grid interties on a smaller scale: “a more measured approach, going through the RTOs, trying to be very careful determining what’s economically justified.”

Warren acknowledges the macro grid will require large-scale planning but reiterates that transmission investments will pay dividends. She points to a study that shows increased transmission development at the “seams” between regions could save consumers up to $47 billion annually and return more than $2.50 for every dollar invested.

She sees the macro grid working in concert with more localized generation to help the country reach the ambitious clean energy goals states are setting and the Biden administration has promised at the national level.

This article was reprinted with permission from the April issue of the National Rural Electric Cooperative Association’s RE Magazine.