Later this year, five teams of scientists and engineers from around the world will start packing up and relocating their laboratories to a patchwork of gravel lots next to a coal-fired power plant in northeast Wyoming. Their mission: nothing less than finding beneficial ways to reuse greenhouse gas that’s released into the Earth’s atmosphere.

They aim to grab the carbon dioxide gas from the burning coal before it can contribute to climate change and turn it into something that might be part of everyday life, like concrete, plastic or liquid fuel.

Dan Walsh, the senior power supply and generation director for the National Rural Electric Cooperative Association, sees value in the Wyoming research, even beyond reducing the environmental effects of coal plants. He says it would be great if we stopped thinking of the carbon in carbon dioxide as nothing more than waste.

“We see a need to take carbon dioxide and turn it into a useful product,” Walsh says. That won’t only reduce waste at coal power plants, he says, but also for users of other carbon-based fuels like natural gas and gasoline.

“The electric power industry is no longer the largest generator of carbon. The transportation industry now owns that title,” Walsh says. “We have to do something, not just for power, but for the planet to come up with a way to utilize carbon dioxide in a beneficial way.”

A breakthrough for humanity 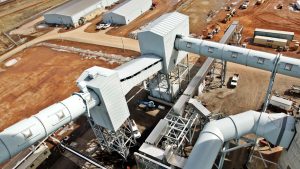 XPRIZE finalists are building labs at this Wyoming power plant where they will test beneficial uses of carbon dioxide.

The Wyoming launching pad for that high-flying goal brings together far-flung partners, including Tri-State Generation and Transmission Association, which supplies electricity to 18 of Colorado’s 22 electric cooperatives. Other partners include Wyoming’s governor, local electric co-ops and a group that awards multi-million dollar prizes “to bring about radical breakthroughs for the benefit of humanity.”

Two years ago, the XPRIZE, a private innovation group based in California, announced $20 million in prizes “for transformational approaches to converting (carbon dioxide) emissions into valuable products.” The final prizes will be awarded in 2020.

In May of this year, XPRIZE narrowed the applicants to 10. Five of those will set up shop later this year on the Wyoming test site. The other five will operate out of Alberta, Canada.

Electric co-ops have a special stake in the Wyoming test site: the power plant is owned by Basin Electric Power Cooperative, which is based in North Dakota; and financial support comes from Colorado’s Tri-State Generation and Transmission, as well as NRECA.

The XPRIZE finalists that will be building their labs at the Wyoming site are:
• BREATHE — from India, working to produce methanol, which can be used as a liquid fuel.
• C4X — from China, developing new ways to produce plastics.
• Carbon Capture Machine — from Scotland, producing building materials.
• CarbonCure — from Canada, specializing in cement and concrete processes and products.
• Carbon Upcycling UCLA — from California, making a substitute for concrete.

During the next six months, those teams will be setting up “mini-factories” at the Wyoming test site, says Jason Begger, executive director of the Wyoming Infrastructure Authority, which oversees the site, whose formal name is the Wyoming Integrated Test Center.

Begger says the teams will set up to access the ductwork and piping providing flue gas from the power plant, which contains about 12 percent carbon dioxide. They’ll develop the technology to separate and convert the carbon dioxide from the flue gas and show that their projects can turn waste carbon into useful products.

The test center project started with a state government initiative to plan for the future of the region’s coal resources, and has quickly connected to the larger worldwide effort to capture and use carbon dioxide. In June, the Wyoming Infrastructure Authority formally partnered with the U.S. Department of Energy’s National Carbon Capture Center, a testing site in Alabama established about nine years ago. That agreement will mean closer cooperation with the Carbon Capture Center’s experience and its network of experts.

Connecting with other researchers

The DOE’s Carbon Capture Program Manager John Litynski explains how the agreement benefits the Carbon Capture Center as well: “We can only test up to 1.5 megawatts, which we call small pilot scale. The Wyoming test center has the capability to test up to 18 megawatts … which we would call large pilot.”

For years, the DOE has explored ways to remove the carbon dioxide from power plant emissions. The basic problem they’re trying to solve is the costliness of the process and the huge share of electricity produced by the power plant that it uses up. One of the longstanding ideas for managing greenhouse gases has been to remove the carbon dioxide from the power plant emissions, then inject into underground rock formations, an idea called carbon capture and storage.

But the XPRIZE and the Wyoming test center take a different approach of finding something more useful to do with the carbon dioxide than storing it permanently underground.

The DOE recently added the quest for new uses of carbon dioxide to its research. The main focus of the DOE effort is to search for better ways to remove the carbon dioxide from power plant emissions. Litynski says that this year the department is spending $90 million to research carbon capture. Its spending about $12 million on carbon utilization, up from about $1 million three years ago. This summer the DOE issued a $13 million request for research projects on “novel methods for making products from carbon dioxide or coal.”

While headlines about coal and climate change are generating controversy around the globe, the Wyoming test center is heading in a different direction. Walsh credits the center’s international collaboration of government, private groups and electric co-ops with “a great vision” for rethinking one of the world’s biggest energy dilemmas.