Providing reliable, affordable electricity is the top priority for Colorado’s electric cooperatives. Co-ops and other electric utilities continue to incorporate additional energy generated from renewable sources, but until these technologies fully mature, fossil fuels remain a part of our overall generation mix to ensure power reliability.

As the U.S. moves forward with carbon reduction goals, electric cooperatives are also looking for ways to provide clean energy and offset the carbon that’s generated during power production. Capturing carbon emissions at their creation source is one of those approaches.

The federal government is making carbon capture a funding priority in 2022. The Infrastructure Investment and Jobs Act passed in 2021 provides $927 million for large, commercial-scale pilot projects as well as $3.5 billion for six demonstration projects at coal and natural gas plants.

Carbon capture involves a series of steps to remove carbon dioxide from its original source to prevent it from reaching the Earth’s atmosphere. During the capture step, CO2 is removed either before or after combustion.

Post-combustion capture is the most common method used at existing power plants. After electricity is generated, the CO2 is removed from the gas mixture found in a plant’s flue.

In pre-combustion capture, the fuel sources are heated with pure oxygen (or steam and oxygen) to release CO2.

Once captured, the CO2 is transported to its next destination. Typically, CO2 moves as compressed gas in pipelines but can also be transported by tanker trucks or ships.

Captured CO2 can be injected into geological formations or recycled for other uses.

One appeal of carbon capture is the abundance of underground natural storage locations, such as deep aquifers, porous rock and unproductive coal mines. The U.S. Geological Service estimates the U.S. has the potential to store 3,000 metric gigatons of CO2, the equivalent of centuries worth of emissions.

Research on how to recycle CO2 is ongoing, but established practices include using the gas in enhanced oil recovery, growing fish food from lab-grown bacteria that feed on CO2 and creating carbon-negative concrete or other carbon-based materials.

As promising as carbon capture sounds, the costs and risks limit the technology’s ability to be implemented on a larger scale. Post-combustion capture often requires expensive retrofitting of power plants. Pre-combustion capture, while more effective than post-combustion, has been limited due to high costs of equipment and pure oxygen. 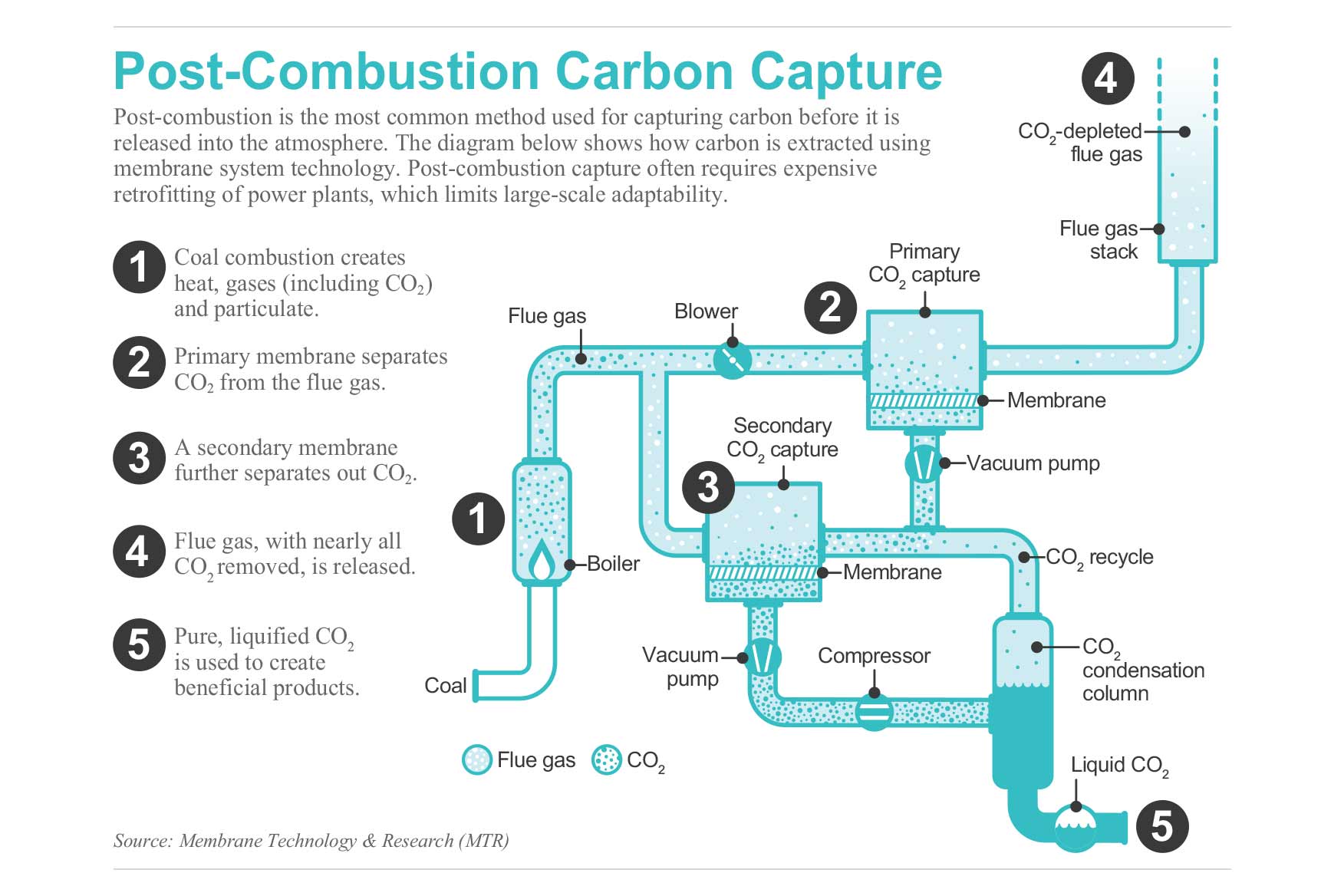 In addition to these costs, the processes require a large amount of energy. Transportation of the gas increases in cost for longer distances between the source and destination, making plants located far away from sequestration locations less feasible. Sequestration also carries the concern of CO2 leaks, which would negate the effort to remove it from the atmosphere.

Despite these hurdles, carbon capture is seen as an important technology in reducing emissions.

In 2015, XPRIZE, a technological development competition, kicked off with the goal of awarding $20 million to develop new and emerging technologies that utilize CO2. The competition was based on how much CO2 was converted and the economic feasibility of the project.

XPRIZE concluded in 2021, and the winning project was a carbon-negative concrete created by a team of UCLA researchers called CarbonBuilt. The research team conducted tests at Basin Electric Power Cooperative’s Integrated Test Center in Wyoming to turn flue gases and fly ash into carbon-negative concrete. The process reduces the carbon emissions of concrete production and traps additional carbon long-term within the final product.

There will be more emphasis from the federal government in 2022 on carbon capture and storage. In addition to the demonstration projects from the infrastructure bill, the Slowing CO2 and Lowering Emissions (SCALE) Act was introduced in 2021 to provide funding to overcome expansion barriers. The SCALE Act aims to reduce costs by financing scaling projects for pipeline infrastructure, creating regional storage infrastructure, and providing grants for creating products derived from large-scale capture.

Capturing carbon is an important tool in reducing CO2 emissions generated from fossil fuel use. When this emerging technology can be deployed on a larger scale, the future of carbon capture will look much more promising.