Basin Electric Power Cooperative, a not-for-profit generation and transmission cooperative that provides supplemental power to rural electric cooperatives in nine states, including Colorado, has an energy portfolio that includes coal, gas, oil, nuclear, distributed and renewable energy. With nationwide focus shifting toward renewable energy, Basin Electric’s leadership understands the cooperative must evolve to continue growing in a carbon-constrained world. One technology that is flashing economical carbon-reduction potential is the Allam Cycle.

The vision for the Allam Cycle consists of gasifying lignite coal to produce synthetic natural gas, which would then be used along with oxygen and carbon dioxide to drive a turbine generator. 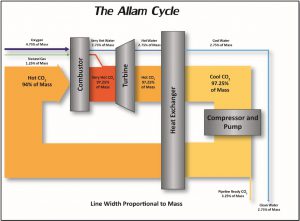 This working fluid is then cooled through a heat exchanger and water is separated from it to create a nearly-pure CO2 stream. The CO2 stream is pressurized and a majority of the flow is fed back to the combustor as the working fluid to begin the cycle again. The remaining part of the CO2 flow is collected and put into a pipeline without increasing the power plant’s cost of producing electricity.

The technology could provide Dakota Gasification Company another source of marketable CO2 to be used for enhanced oil recovery or other purposes, and provide Basin Electric a more efficient and CO2 emission-free way of generating electricity using lignite coal.

Jim Sheldon, Basin Electric senior research and design engineer, heads the cooperative’s Horizons Committee. The group is responsible for monitoring and disseminating information regarding major environmental issues and new technologies — one being the Allam Cycle.

“This cycle uses CO2 as the working fluid instead of water, which we currently use in our coal plants. The first advantage is the dramatic efficiency gain using CO2 since it stays in the vapor phase instead of changing from liquid to vapor and back,” Sheldon says.

“Secondly, the combustion products in this cycle can be sent directly to a turbine to generate electricity.”

To research further development of Allam Cycle technology and its use with lignite coal, Basin Electric; the Energy & Environmental Research Center; 8 Rivers and ALLETE, Inc., along with ALLETE subsidiaries BNI Coal and Minnesota Power, were granted $1.48 million toward the total $3.18 million one-year research project.

A first-of-a-kind plant using natural gas will start up in Texas in 2017, along with a more in-depth study using lignite to make synthetic natural gas in North Dakota. Basin Electric will monitor the technology’s development and participate in the North Dakota study.

“If the first-of-a-kind plants prove out the initial work, this technology could be an economical means of using coal in a CO2- and emissions-constrained future,” Sheldon says.

Delta-Montrose Electric Association, which serves Delta, Montrose and Gunnison counties, partnered with GRID Alternatives to develop a 150-kilowatt community solar array, specifically for members qualified as low-income. Once the project is complete, participants can take advantage of locally-produced solar power and experience long-term energy savings. Other benefits include energy efficiency and basic solar education, full support and paperwork assistance, and no maintenance or installation requirements for participants. On average, participants will save up to 50 percent on their bill.

A crowd of employees, partners and members recently gathered for the Yampa Valley Electric Association Community Solar Farm Raising. The 145-kilowatt solar garden, made up of 558 panels, was made possible through the combined efforts of GRID Alternatives Colorado, the Colorado Energy Office and Yampa Valley Electric Association, with offices in Craig and Steamboat Springs. The three partners brought their unique resources together to create a solar garden that will provide renewable energy at a reduced cost to approximately 35 income-challenged YVEA households.

In this case, the output from the array goes to offset the electric consumption of YVEA members who are struggling financially. Those who benefit met specific qualifications and made a commitment to support the project by helping with installation or participating in some way.

After months of planning, construction and site work began August 2016. Rogue Enterprises prepared the site and contributed to reduce costs while teams from YVEA and GRID went to work on member outreach, sending letters to previously weatherized members in its territory and hosting two educational/qualifying workshops. Other teams reached out to potential corporate sponsors and volunteers.

The onsite work continued with racking and fencing and volunteers installing all components of the garden. September 9-11, GRID and YVEA hosted 45 members of the Women in Solar effort for a weekend of camping, networking, workforce development and long hours spent volunteering at the worksite.

It all came together on September 16 when YVEA employees spent the day lifting the final panels into place and installing the last of the micro-converters. YVEA hosted more than 100 people for a celebration luncheon including representatives from GRID and the Colorado Energy Office, Rep. Diane Mitch Busch, Greg Winkler, the regional manager for DOLA, along with members whose energy costs will be reduced.

“This solar project is a demonstration of what can be achieved when we believe answers to problems exist,” said YVEA President and General Manager Diane Johnson. “This project brought together people from all over the country who believed in a better solution: A solution that trains more skilled workers in the solar field. A solution that gives YVEA the opportunity to gain hands-on experience with solar by owning and maintaining a solar array, recognizing that the future holds diverse fuel choices and that it is our responsibility to understand and embrace various technologies on behalf of our members. And, a solution that helps to bridge what is sometimes a divide between solar advocates and electric utilities. Many “right” answers exist for the future of energy and we expect to embrace varied and innovative fuel choices, together.”

United Power, Inc., and Silicon Ranch Corporation announced that the largest co-op solar farm in the state of Colorado is now live and generating renewable energy for United Power members in northern Colorado.

The solar farm, approximately 4 miles east of Fort Lupton on Highway 52, occupies 90 acres and features a single-axis tracking system to allow 160,000 panels to follow the sun across its daily arc. The 13-megawatt project produces enough carbon-free electricity to help power more than 2,500 homes and businesses in Weld County.

The project itself is the result of an initiative by United Power to incorporate cost-effective renewable energy sources to complement its generation portfolio. United Power is the rural electric cooperative responsible for providing electric service to more than 78,000 meters representing more than 200,000 customers in Colorado’s northern Front Range. Under its agreement with Silicon Ranch, which will own and operate the facility, United Power will receive all the energy produced over a 20-year period. In July, the Smart Electric Power Alliance recognized United Power as one of the top 10 electric cooperatives in the country in all six solar categories evaluated. United Power was named as the number one co-op in annual megawatts.

“United Power is excited that this partnership with Silicon Ranch is allowing us to add clean, renewable energy to our power mix,” said Darryl Schriver, United Power CEO. “It illustrates how United Power is trying to strike a balance between traditional and renewable energy sources on our system. The project is also part of a concerted effort by the cooperative to diversify our power sources to provide more predictable power costs for our members today and into the future.”

Silicon Ranch President and Chief Executive Officer Matt Kisber said, “The leadership at United Power deserves tremendous credit for their vision and commitment to provide competitively-priced, renewable power to their membership. As long-term owners of our projects, we take great pride in being active members in the communities we serve and are excited about the economic and environmental benefits this solar farm has brought and will continue to bring to Fort Lupton and the surrounding region.”

McCarthy Building Companies was contracted by Silicon Ranch to build the facility and hired more than 100 workers, the vast majority of whom were hired locally, for the seven-month construction effort. McCarthy has an office in the Denver area and is one of the largest American-owned construction firms in the country.

“We have been fortunate to develop a number of meaningful relationships here in Colorado, not only with our partners at United Power, but also with Upstate Colorado Economic Development, the Weld County Board of County Commissioners, the Fort Lupton City Council, local city and county planning departments, and our local project partners,” Kisber said. “We celebrate the commissioning of this solar plant as a true group effort, and we are grateful for all who had a hand in making this facility possible.”

United Power and Silicon Ranch held a dedication ceremony at the solar farm on Monday, September 26. In attendance were local, regional, and state officials, representatives from the project team, and students from Fort Lupton High School, who received a special tour of the facility.