Co-ops ready for utility drones to expand their reach

By Reed Karaim and Mona Neeley

Imagine a drone flight at an electric cooperative in the not-too-distant future. Cool technologies, including utility drones at electric co-ops, are legitimately part of the conversation.

No longer limited to staying within the line of sight of its on-the-ground operator, it travels much, much farther down the power lines, using an array of visual, thermal and LIDAR sensors, which use lasers, to accomplish miles of inspection in a single flight.

Flying higher than today’s drones with an optical sensor on board, this future drone scans the sky for dangers, busily feeding data to an onboard artificial-intelligence-powered computer, which is linked to the flight computer. Sensing a private plane in its airspace, the drone automatically executes an avoidance maneuver, dropping rapidly in altitude and banking to avoid any chance of collision.

Miles away, at a control station, the co-op’s drone pilot sees the maneuver and could take control if necessary. But knowing the drone is designed to adjust its flight path more quickly than humanly possible, the pilot decides to allow the unmanned vehicle to fly itself to safety.

Danger averted, the drone resumes its mission down 50 miles of line or more, saving the cooperative untold hours of physical inspection by ground or helicopter.

“There is no question that that (beyond-line-of-sight rules) will have a huge impact on how we’re able to use and grow this technology,” said Bill Havonec, GIS lead for Sangre de Cristo Electric in Buena Vista, in an interview with the National Rural Electric Cooperative Association’s RE Magazine.

This future is already here for a small number of electric utilities that have received Federal Aviation Administration waivers allowing beyond-visual-line-of-sight (BVLOS) flights. But utility drones at electric co-ops is coming for more organizations as the FAA moves toward issuing regulations that could make BVLOS operations typical for those that meet the requirements.

An FAA advisory committee published recommendations establishing a roadmap to meet that goal, which could arrive within the next couple of years. The proposed changes also would give expanded right-of-way access and airspace rights to BVLOS drones that meet standards for avoidance and control capabilities.

“This is a huge deal,” said Stan McHann, senior research engineer and chief drone pilot for NRECA. “You’re going to see a massive improvement in what you can get done in a day.”
Josh Dellinger, general manager of Empire Electric Association in Cortez, agrees. The additional distance that drones will be able to fly will be especially valuable in hard-to-reach places. “We have quite a bit of that where lines go through areas adjacent to the road or forest service or BLM land,” he says.

“A trainload of data”
BVLOS is a key part of an evolution in drone capabilities that could transform inspection and maintenance for electric utilities in the coming years. McHann also foresees smaller drones strategically placed throughout a distribution system, able to respond to a SCADA event by taking to the air and quickly checking a trouble spot, sending images and other data back to operations, and giving the co-op a clearer idea of what is going on and what response is needed before sending a crew. 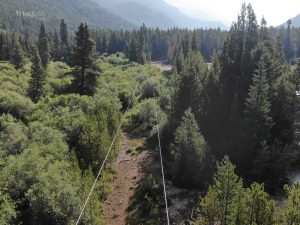 Expanded use of drones will help co-ops inspect power lines in hard to reach places.

As utility drones at electric co-ops become commonplace in co-op fleets, other innovative uses are likely to surface. Even with today’s limitations on flight range, drones are being used by co-ops for regular inspections, vegetation management, placing bird diverters on lines and pulling lead lines across rugged terrain to run new transmission lines.

“At SDCEA, we’re discovering a variety of uses for drone technology. It started with inspections and getting data into the GIS/ mapping and work order systems,” said Havonec.
“In addition to our routine maintenance inspections, we’re prioritizing flight plans with historical outage data and using that as a tool for system improvement,” he said. “Additionally, we’re inspecting new construction rights-of-way and vegetation management areas for inventory, monitoring and quality assurance.”

“Colorado’s co-ops each have between 1,000 and 10,000 miles of line to cover,” said Curt Graham, a job training and safety instructor with CREA who visits many of those co-ops regularly. “When you can get an uncrewed aircraft doing line inspection for you, looking at things on a schedule and reliable enough where you don’t need to have an operator actively supervising it all the time — that’s got real potential,” he said. “And it’s coming.”

Advanced sensors will provide a new level of granular detail on the condition of system hardware. Infrared sensors, for example, can look for hot or arcing connections, transformers and other components, spotting current or future problems hidden from the human eye.

Taking full advantage of these capabilities will require the ability to effectively manage the data they can provide.

“Software is key here,” McHann noted. “One flight will create a trainload of data, and it’s essential that you be able to process it and see that it’s integrated into your system in ways that get the information where you need it.”

The human factor
Operating today with a drone and operator out in the field, McHann said, a co-op can cover to 80 to 120 assets a day, maybe only 70 to 80 in rougher terrain. Taking advantage of the longer range, flying time and speed at which BVLOS drones can operate, a greater-than-tenfold increase becomes possible, with a drone able to cover nearly 1,400 assets in a day.

“And as the price of the cameras and sensors and other equipment come down as well, it will effectively bring everyone into this space,” said Havonec.

While the newest hardware often gets the most attention, the unmanned vehicle technology is just a piece of the program. The parts that really tie everything together will be the training and regulatory requirements necessary to fly the drone.

Meeting those standards to take full advantage of BVLOS and other advancements down the road will be essential to economically meeting the demands of maintaining the grid, according to co-op managers.

The rewards will be increased efficiency, system reliability and personnel safety through reducing hazardous tasks such as pole climbing, and these can outweigh the costs.

A Monte Vista-based electric cooperative was awarded a USDA Rural Development grant of nearly $2 million to deploy fiber internet to rural parts of the San Luis Valley in Colorado. San Luis Valley Rural Electric Cooperative’s internet subsidiary, Ciello, will use the grant for high-speed internet and will connect 129 people, eight businesses, one public school and 20 farms to the essential technology. Ciello began providing high-speed fiber internet access to its rural service territory in 2014.

USDA Secretary Tom Vilsack said in recent press release, “Connectivity is critical to economic success in rural America,” and is vital to its growth and prosperity.

These innovative solutions and partnerships help connect rural Colorado and will provide reliable internet access to underserved communities. This is just another example showing how Colorado’s electric co-ops are leaders in innovation and are continuously finding ways to bring critical utility services to their rural communities.

Congratulations to SLVREC and Ciello for the $1.9 million grant for high-speed internet. CREA looks forward to sharing more about how this project brings innovation to rural Colorado communities and residents.

Most drivers traveling to or from Denver through the northeastern plains of Colorado might approach exit 180 on Interstate 76 without much thought, but for electric vehicle drivers traveling the route, that’s about to change. Thanks to Highline Electric Association and its partnership with Tri-State Generation and Transmission and the Colorado Energy Office, the Wagon Wheel Conoco at exit 180 in Julesburg is home to the second-in-the-state single-phase DC fast charging station, making it an invaluable stop for new EV technology.

The FreeWire® Boost™ Charger 150 is located at an ideal place for EVs to hook up for a fast charge when driving along I-76 to or from Denver. The interchange is 180 miles from the Denver metro area and the placement couldn’t be more perfect, as the average range for most EVs is over 200 miles.

Highline Electric Association Manager of Member Services Tad Huser said this charger is designed for public use and this location on the interstate 76 corridor bridges the EV fast-charging gap between Fort Morgan, Colorado, and Ogallala, Nebraska.

Traditional EV fast chargers run on three-phase power, which can be a less common setup in rural areas due to the infrastructure demands and upgrades often needed to install a typical EV fast charger.

Now for the specs: The Boost Charger 150 unit has an on-board 160-kilowatt-hour battery that can impart up to 150 kilowatts of power to a single user. If both charging heads are being used, the max power to each charging head is split and can charge at 75kW max each. Both charging heads are the CCS connector that is quickly becoming the international standard outside of Tesla’s proprietary connector.

The fees at the station are $0.25 per kWh and there is a parking/idle fee of $0.10 per minute after 30 minutes of idle (plugged-in) time to incentivize unplugging and moving along once charging is complete. The station has a credit card terminal where users can swipe to pay. Users may also scan a QR code on the unit that takes them to the EV Connect mobile app where they can pay via their phone as well. The next time you need to pull over for “fuel,” make this stop for new EV technology.