By Mona Neeley
Photography by Studio 1441

There will be lights this Christmas in the small, remote village of La Montanita de la Virgen, thanks to electric cooperatives in Colorado and Oklahoma who were tasked with bringing light to Guatemala. And, 16 lineworkers here in the United States will celebrate the holidays with a special appreciation for all they have.

The lights came on for the first time in mid-September in La Montanita in the municipality of San Pedro Pinula. Life is slowly changing as the villagers enjoy the benefits of electricity. 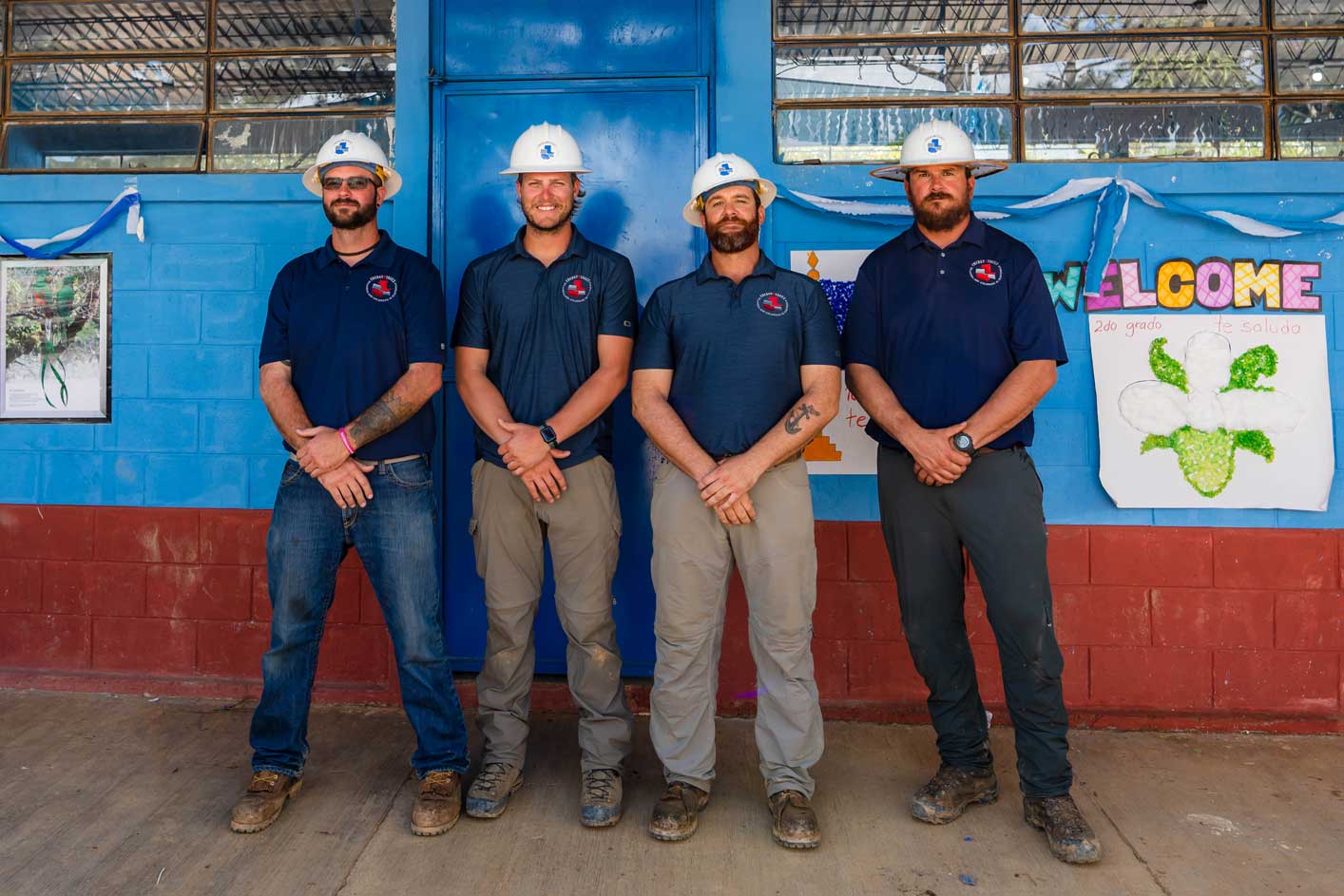 A team of 16 lineworkers, including four from Colorado’s electric co-ops, spent August 29 to September 16 in the rural Guatemalan mountain community building power lines to bring electricity to the area. The men installed 5 miles of primary line, 3.5 miles of secondary line and six transformers to extend the country’s power grid to the remote village. They also wired 81 homes, two churches and the elementary school as part of a project coordinated by NRECA International.

It was grueling work for the lineworkers, who worked without the benefits of their usual bucket trucks and other power tools. Instead, they climbed each pole with their spikes, used block and tackle configurations to lift transformers and heavy spools of wire, pulled that wire by hand across deep valleys and up mountainsides, and generally did their line work the way it was done years ago in the States.

“Bringing electricity to remote areas in developing countries takes electric cooperatives back to their roots,” noted CREA Executive Director Kent Singer. Being part of a project like this helps lineworkers appreciate where Colorado’s electric co-ops got their start, with neighbor helping neighbor to set those first poles and string the first wires.

That was how it was in Guatemala, too. The villagers were invested in this project and provided assistance where they could.

It Takes a Village

La Montanita is a remote mountain community of about 560 people located off a gravel road and up a dirt trail. Homes are spread throughout a large area that surrounds the school, church and dirt soccer field at the center of the community. Much more like homes spread out through Colorado’s rural co-op territories than a town with streets and nearby neighbors, the community, brought its people together to help the American lineworkers complete this project. 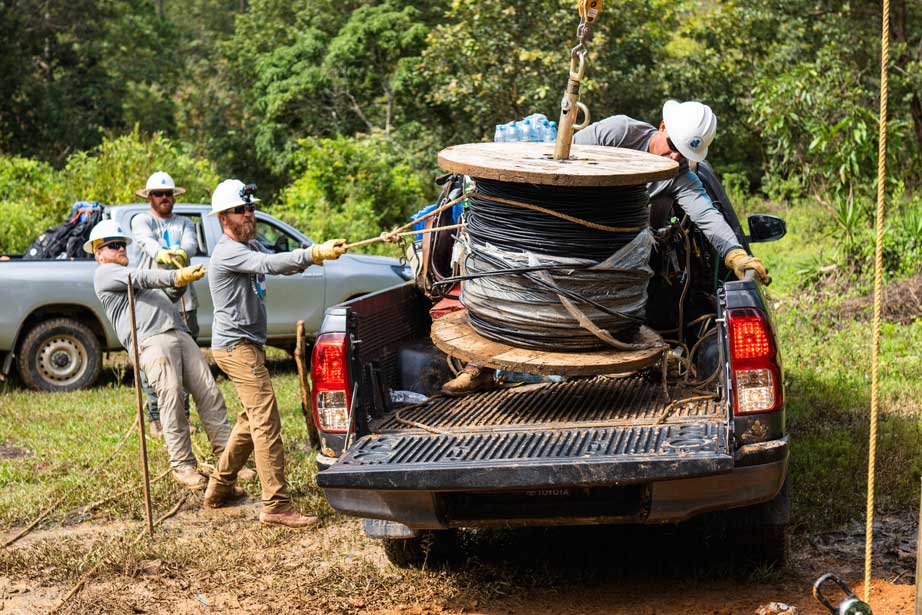 Lineworkers use pulleys and brute strength to unload a spool of wire.

Prior to the Colorado-Oklahoma team arriving, men in the village installed the power poles and anchors outside of homes after working together to carry the poles to each site and dig the holes. Then, when the Americans arrived, the men, young and old, took turns helping wherever they could.

They climbed trees, carried equipment and helped pull line, especially when it had to go up a mountainside. There was one long span across a deep, wide river valley, remembered project leader Damon Lester, an Oklahoma lineman. The American team expected it to take most of the day to get the line from one side to the other. It took 45 minutes, Lester noted with a wry smile.

Once the team was set on one side of the chasm and the wire was ready, villagers took off with the heavy line. They were down one side, across the small river and up the other side to the pole the team had ready on the other side, Lester explained. It took no time at all. 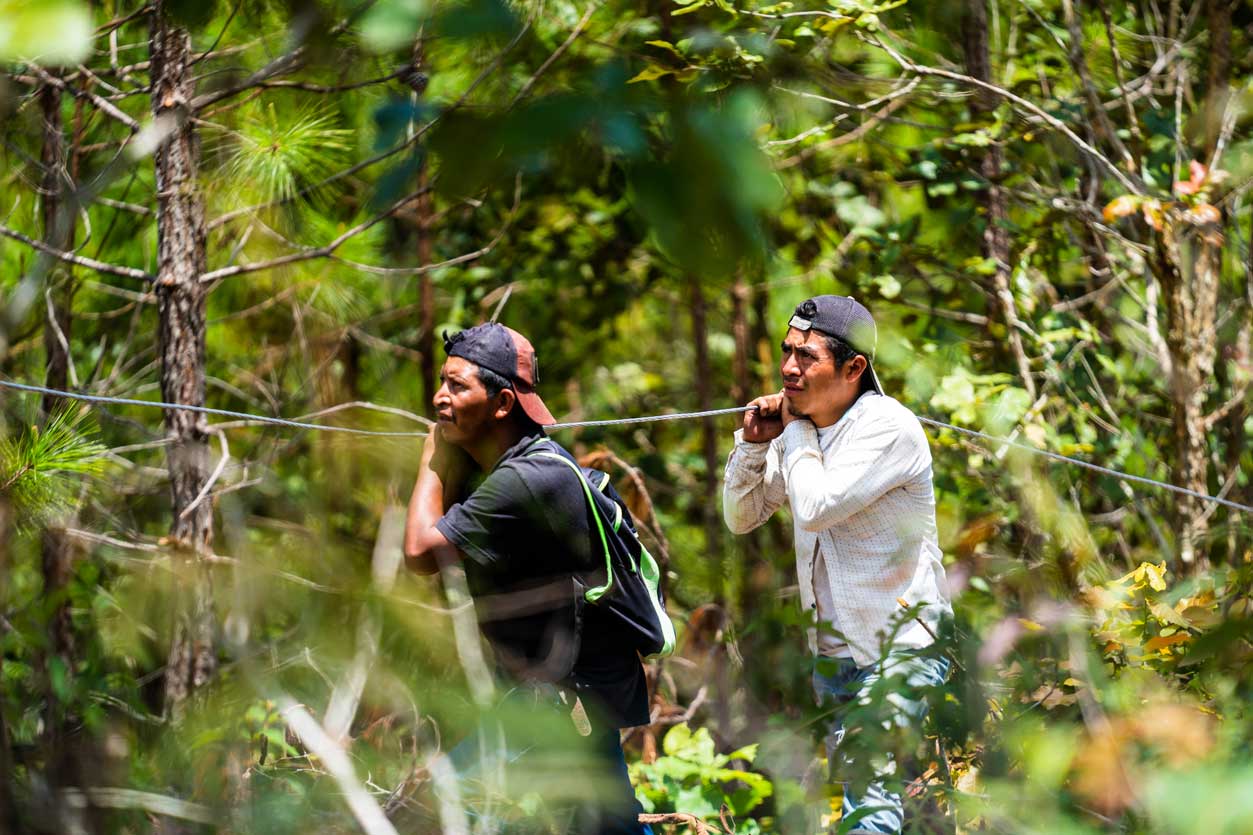 That’s how the villagers were, said Trenton Jole, a lineman from Holy Cross Energy headquartered in Glenwood Springs. They would take turns helping the Americans in between working in their small corn fields on the sides of the mountains since it was planting time. They would hand plant a field and then show up the next day to help on the electrification project.

An Experience Worth Remembering

Grand Valley Power lineman Zeb Birch remembers an older man who was on the village council. He was there to help the team even though he didn’t have the equipment or, even any good shoes. “His shoes were completely blown open,” Birch said. 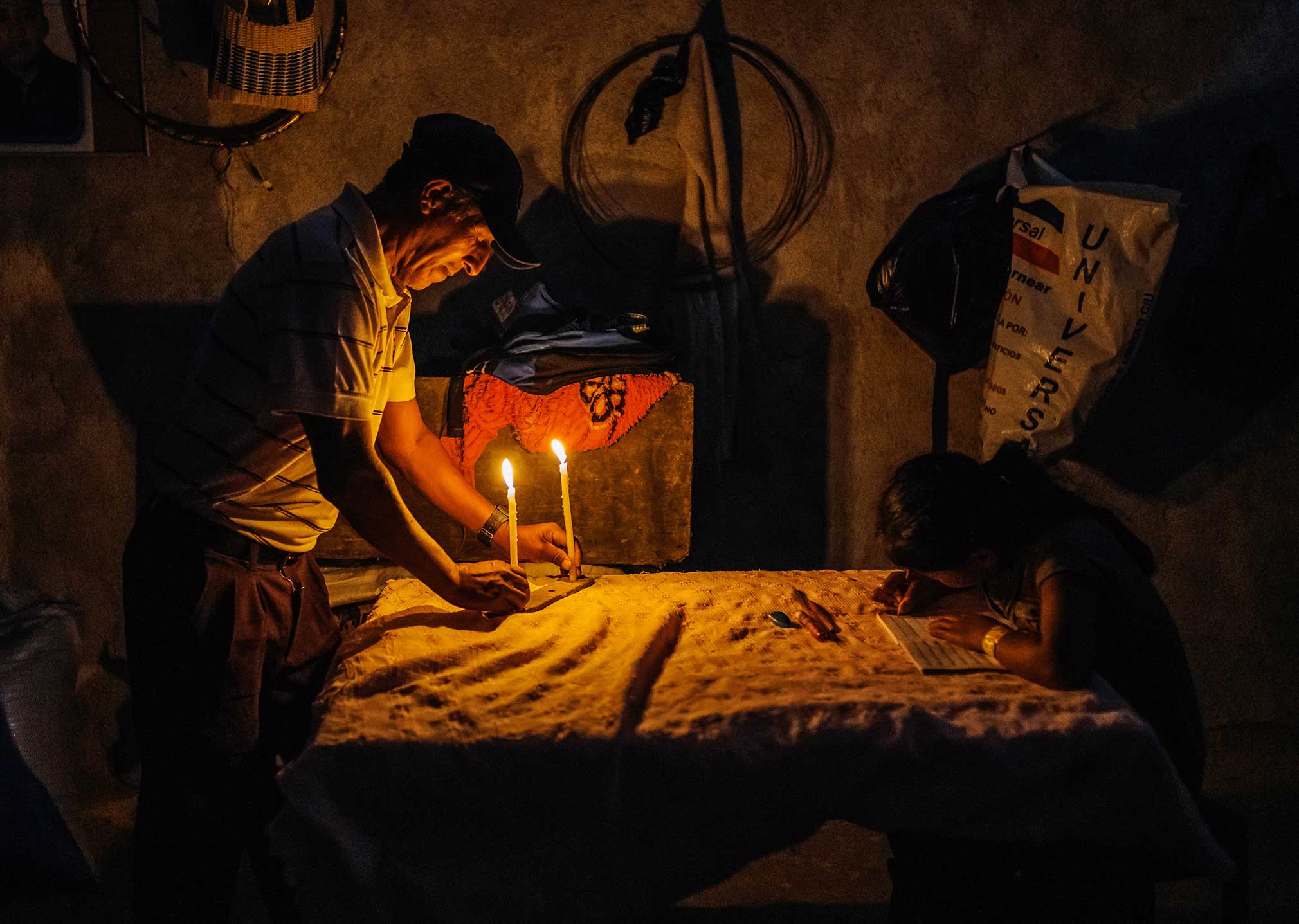 The inside of a typical village home.

Many of the younger men had backpacks to carry tools, rope and other supplies, but this older man didn’t have that either. He had an old sack that he used for carrying sand. It had been repaired and a handle rigged on it so he could carry whatever he needed — he was there to help bring electricity to his village.

Most of the homes in the village also didn’t have much. The linemen who wired the homes saw inside those homes. They saw how the kids did their homework by candlelight, how the people made do with what they had.

The homes were mostly built with adobe with tin roofs. Some had dirt floors. Some kitchens were a covered area on the side of the house. Other homes were simply a large room with sleeping hammocks at one end and the kitchen with its fire and workspace at the other end. But the people had pride in what they have. Their kids were clean, their clothes washed on stones at the river that runs through the community.

Celebrating the Gift of Light

Each of those homes received four lightbulbs, two light switches and two electrical outlets. Each homeowner chose where those were placed. 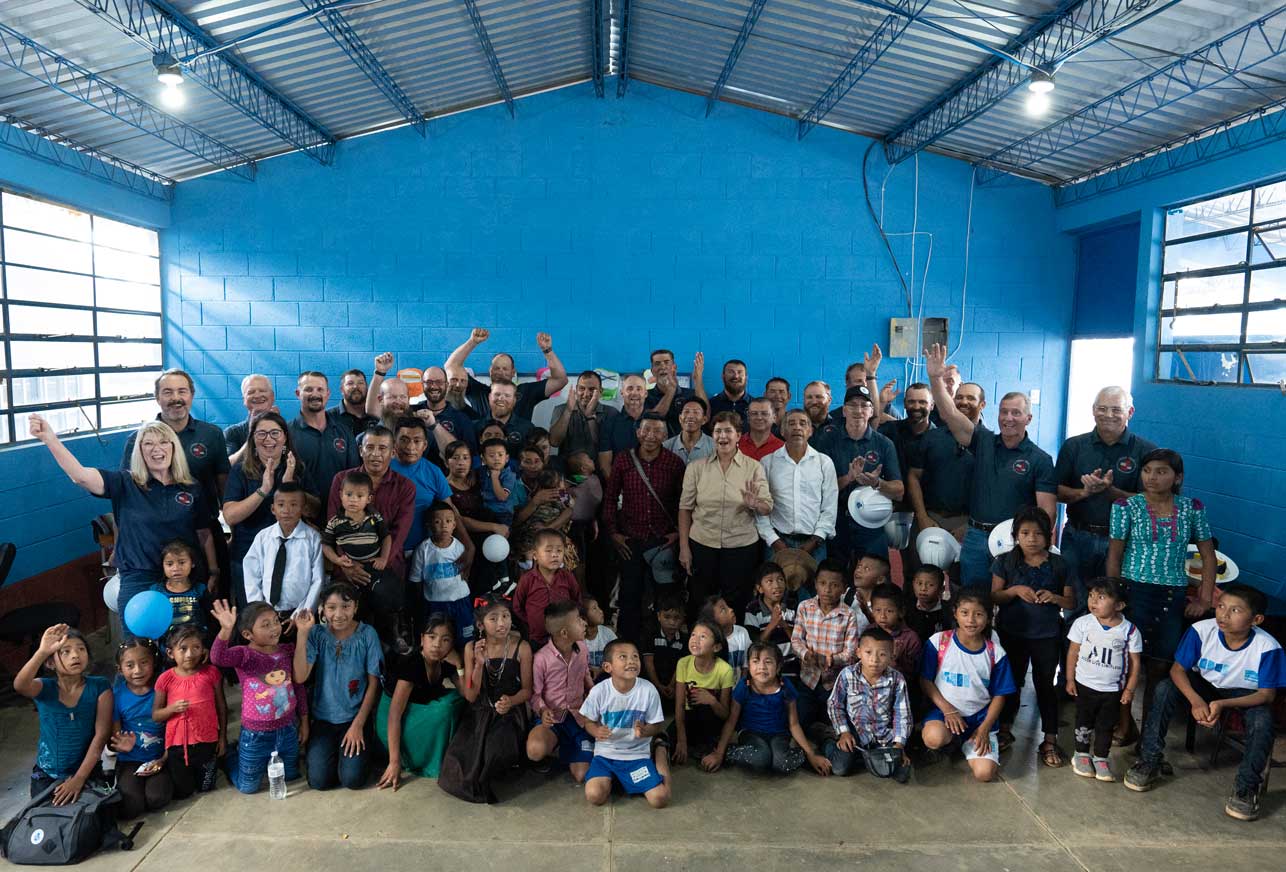 Lineworkers, government officials and villagers celebrate the lights coming on at the school in La Montanita de la Virgen, Guatemala.

It’s not much, but these people are resilient. They have built a life for themselves in a place with no running water and, up until now, no electricity.

They are grateful that electricity has now come to their community. “We thank God and the Americans for the gift of electricity,” said Roberto Ramirez Guerra, the mayor of San Pedro Pinula. He has been working with NRECA International, the philanthropic arm of the National Rural Electric Cooperative Association, since 2019 to bring electricity to this village. The pandemic stalled that progress until this year.

He led the celebration on Tuesday, September 13, when all of the villagers turned out to thank the lineworkers who brought light and electricity to their community. There was dancing, songs, poems and speeches as the villagers thanked the Americans for coming to Guatemala and working so hard for three weeks. 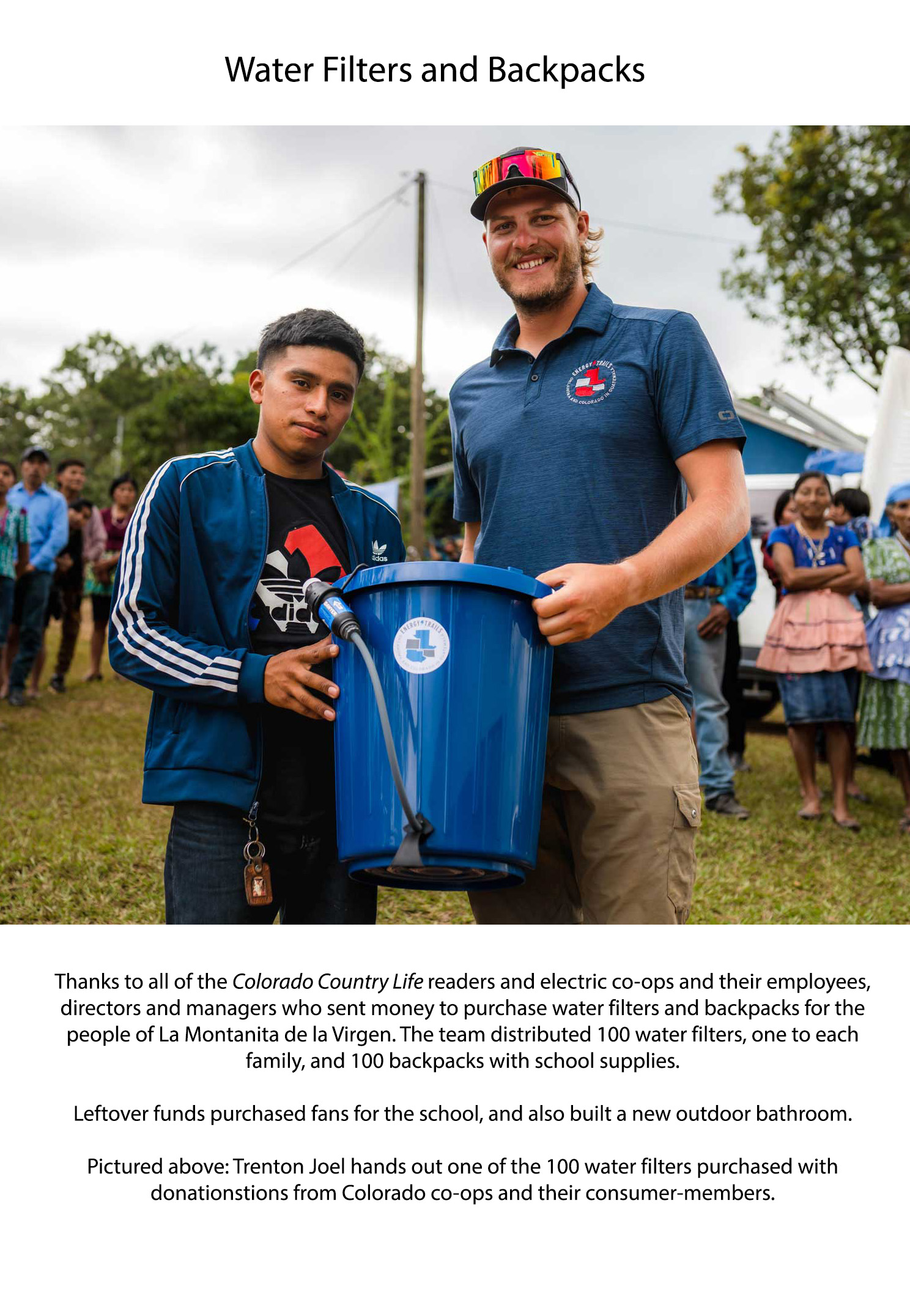 It was a bittersweet time for the lineworkers. They were ready to go home to their families, but they were leaving pieces of themselves behind in a community where they had established deep ties in a short amount of time.

“It was a privilege to use the line work trade to make a positive difference in the lives of the people of La Montanita. Their simplicity, joy and friendship were truly a gift,” said Clayton Shonk of White River Electric in Meeker.

“They can be so happy with so little,” added Nathaniel Pennell of Mountain View Electric, headquartered in Limon.

“We planted a seed that will be harvested for years and years. It’s not going to become a big plant by tomorrow, but it will continue to grow and bear fruit with time,” Lester said. “The elders see it as a convenience. The younger ones see it as opportunity for economic development.”

Access to electricity will enable growth in education, security, health care, economic prosperity and, overall, a better quality of life.

This Christmas, the lights will be on in the village of La Montanita de la Virgen, thanks to the Colorado and Oklahoma lineworkers who gave of themselves.

“We all believe in giving and doing what it takes,” said Birch, speaking for the entire American team, “yet, I didn’t give a tenth of what I got out of it.”

Editor Mona Neeley, traveling with the leadership team, was in La Montanita when the lights came on in the school.