Even by the standards of other major utility construction projects across the nation, the numbers behind Tri-State Generation and Transmission’s recently completed, 230-kilovolt Montrose-Nucla-Cahone (MNC) transmission project are staggering. Throw in a worldwide pandemic during the construction phase and we have a real story to tell. 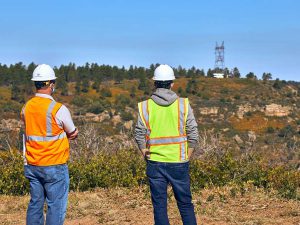 The basic facts are impressive for a project built in remote areas of the Rocky Mountain West. The project began in May 2013 and required the approval of nearly a dozen local, state and federal agencies, including the U.S. Bureau of Land Management, the U.S. Forest Service, the U.S. Fish and Wildlife Service, the Colorado Public Utilities Commission and Colorado Parks & Wildlife.

MNC traversed more than 80 miles of often challenging terrain, and the associated severe weather, through portions of Dolores, Montrose, Ouray and San Miguel counties in Colorado, at times reaching elevations of more than 11,000 feet above sea level.

The Maverick substation was to initially operate at 115 kV, while accommodating a future need for 69 kV of service. The decision last year to decommission Tri-State’s Nucla Station power plant and the associated Nucla substation earlier than planned required the Maverick substation build to take place earlier as part of the initial construction phase.

Transmission lines and fiber optics
The transmission line project also included more than 300 miles of access improvements and significant vegetation management along nearly 60 miles of federal land. In total, MNC required 435 wood structures and 131 steel structures; 1.37 million feet of conductor; and nearly 475,000 feet of optical ground wire. The optical ground wire is part of the regional fiber optic communications backbone between Grand Junction and Albuquerque. Even these figures do not begin to tell the whole story.

The crowning achievement of this challenging project included the crossing of the historic Dolores Canyon just east of Dove Creek. The Dolores Canyon, characterized by red Wingate Sandstone, old-growth ponderosa trees and the winding Dolores River, begins in the southern San Juan Mountains and meanders toward the Utah border. The Juan Rivera expedition viewed the Dolores Canyon in 1765 while exploring trade routes in Ute country.

Dolores Canyon a significant crossing
For Tri-State, the crossing of Dolores Canyon presented several unparalleled challenges in the U.S. transmission industry, with the exception of the smaller, original (and still existing) 115 kV wood-frame crossing of the canyon completed in 1958. Even if the Gateway Arch in St. Louis were placed in the 1,100-foot canyon, it would not be visible, except to someone standing on the rim of the canyon. 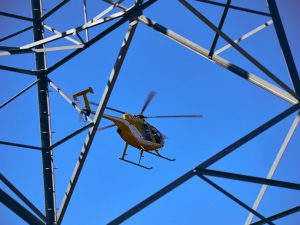 Tri-State Transmission and Generation uses air support to complete the Montrose-Nucla-Cahone transmission project. This project includes crossing the Dolores Canyon, which spans nearly 6,600 feet between two 85-foot-tall lattice towers, one each on the north and south rims of the canyon.

The Tri-State crossing effort required a span of nearly 6,600 feet between two 85-foot-tall lattice towers on the north and south rim of the canyon. When counting distances from the “dead ends,” which hold the weight of each of the five 20,000 pounds of conductor and optical ground wire tensions, the distance was 8,000 feet. The line dropped some 400 feet between the lattice towers into the canyon.

Tri-State made five crossings of the canyon: three with conductor and two with optical ground wire. A helicopter first pulled a 5/16-inch rope from the south to the north end of the canyon, and then winch equipment pulled back a 3/4-inch rope back to the south. At that point, the rope then pulled the conductor and optical ground wire back from the south to the north rim. This work started during the week of September 28 and was completed by October 10.

To put some of this in perspective, the transmission line over the Dolores Canyon spans about 1.25 miles between lattice towers and more than 1.5 miles between the dead ends. Only three other spans worldwide are known to be longer, although on much larger towers: an 8,714-foot span between the Jintang and Cezi islands in China; the crossing of the Norwegian Sognefjord at 15,082 feet; and the Ameralik Span in Greenland at 17,638 feet.

In fact, the Dolores Canyon segment wasn’t the only significant crossing.

Workers previously crossed Glade Canyon, 2.5 miles north of Dolores Canyon, which was a 2,800-foot crossing, or just over half a mile, and would have been a significant effort for any other transmission line project but now the second largest on MNC.

The Montrose-Nucla-Cahone transmission line project benefits
The MNC transmission line was energized in October and was complete — aside from reclamation work — by the end of 2020. The project cost nearly $105 million and required 65,000 labor hours for construction.

Completion of this project brings a number of immediate benefits to Tri-State and the bulk electric system. Greater reliability and lower maintenance needs, greater operational capacity and flexibility, and the ability to accommodate load growth in the area are just a few of the immediate impacts. MNC also paves the way for future benefits, including the ability to support Tri-State’s Responsible Energy Plan and the growing interest in generation interconnection projects throughout western Colorado.

Numerous departments and dozens of employees throughout Tri-State left their marks on this once-in-a-career project. Without the hard work and dedication of the MNC project team, none of the amazing numbers, accomplishments and benefits could have been achieved.

Jonah Martin is the manager of the Montrose-Nucla-Cahone project management office and an employee of Tri-State Generation and Transmission. Tri-State is a wholesale power supply cooperative, operating on a not-for-profit basis, with 45 members, including 42 utility electric distribution cooperatives and public power district members in four states that together deliver reliable, affordable and responsible power to more than a million electricity consumers across nearly 200,000 square miles of the West. For more information about Tri-State, visit tristate.coop.

San Miguel Power Association announced that it received a Charge Ahead Colorado grant from the Colorado Energy Office The grant money will go toward the installation of two Level II Dual Port charging stations: one at SMPA’s office in Ridgway, and another one at its office in Nucla.

“We’re excited to be able to offer this service to our communities,” SMPA CEO Brad Zaporski said in a recent press release. “As folks begin to save money by replacing their gas automobiles with electric, they’re also contributing to a much larger effort to reduce carbon emissions as the electric grid that powers them gets cleaner every day.”

SMPA also offers beneficial electrification rebates to its consumer-members to help cover the costs of electric vehicles or all-electric homes, and lawn mowers and other outdoor power equipment. There are also rebates for private and public EV charging stations installed within the co-op’s service territory.

The country’s electric co-ops have been instrumental in providing a market-ready early warning system that detects cyberattacks on utilities. Essence 2.0 was developed through work by the National Rural Electric Cooperative Association, the co-ops’ national trade association, as part of its efforts to defend the nation’s energy supply from unknown, emerging threats.

The system provides “black box” sensing technology that measures the ongoing behavior of operations. Many cyberattacks lay dormant on a system for months before they are identified and mitigated. Essence 2.0 acts as a monitoring tool that accelerates the detection of any anomalies on the system that could indicate a breach.

Developed by NRECA in collaboration with the U.S. Department of Energy, BlackByte Cyber Security, LLC, and Referentia Systems, the program was initiated in 2014. Essence 2.0 was introduced in 2020 and third-party evaluation has confirmed that the program does continuously assess the electric power grid for anything out of the ordinary, using a set of algorithms. When something unusual is detected, the technology provides immediate, real-time indicators.

“Being able to identify emerging threats in real time is the most important element of this approach so that electric cooperatives and other users can adapt quickly — not weeks later — to protect their systems,” said Emma Stewart, chief scientist at NRECA.

AES will develop the projects that will add a total of 20 megawatts of renewable energy capacity and 40 megawatt-hours of battery storage in two Colorado towns. High Mesa Solar in the Town of Parachute, and Peace Bear Ranch Solar in the Town of Silt, will each provide 10 MW of solar energy and 20 MWh of battery storage. HCE will buy the electricity and storage capacity from both projects.

“Projects like these will allow HCE to attain our 100X30 clean energy goals while keeping power supply costs low,” HCE VP, Power Supply & Programs Steve Beuning said in an April press release from HCE. “We are pleased to be partnering together with AES to develop reliable and resilient energy resources locally that will benefit all HCE members.”

The battery storage will allow HCE to shift electricity production from the solar panels into evening hours when customer demand is often highest. The development of the Peace Bear Ranch Solar project is contingent on the results of engineering studies currently being performed by Xcel Energy to assess grid impacts. Construction is planned to begin later this year, and the projects are expected to be fully operational by the end of 2022, subject to county land use permitting approvals.

Future editions of CREA’s Energy Innovations newsletter will keep you informed about the progress and completion of these projects throughout the remainder of the year.