Being part of a large network is never more important than when a natural disaster hits an electric cooperative. Take, for example, when the monstrous and destructive East Troublesome Fire swept through Grand County and Mountain Parks Electric’s service territory in October. The 60 employees of the area’s local electric cooperative were not on their own.

MPE is a small, local, independent organization that serves Grand and Jackson counties as well as parts of Larimer, Routt and Summit counties in the central mountains of Colorado. But the co-op is not totally on its own when disaster strikes. It is part of a network of electric co-ops that all adhere to the sixth cooperative principle: cooperation among cooperatives.

With a call to the Colorado Rural Electric Association, the electric co-ops’ statewide trade association, the word was out that MPE needed assistance. Just a couple days later utility trucks from electric co-ops across the state rolled in to Granby. Crews of lineworkers were there to assist MPE in getting the backbone of its system back on line so that the local crews and hired contractors could then methodically replace and repair individual services and infrastructure. 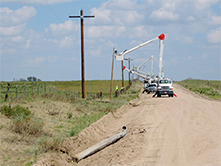 Crews from neighboring electric co-ops assist in getting power lines restored after a summer storm on the eastern plains.

But as soon as the windstorm was over, electric co-ops across Colorado and western Nebraska that had not been affected by the storm stepped up to assist in safely getting the lights back on for these co-ops. Neighboring co-ops that could spare a crew, sent it to help. Contractors, who supplement co-op crews on projects throughout the year, made their crews available.

That quick response from other co-ops comes from a combination of a centuries-old co-op tradition and agreements among electric cooperatives. 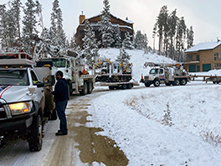 Lineworkers prepare to get the poles and lines back up in a neighborhood affected by the East Troublesome Fire.

This help is needed, especially by smaller co-ops, because these large natural disasters (such as wildfires, derechos, ice storms, blizzards and tornadoes) that cause devastation is more than many local electric co-ops can quickly repair on their own. When multiple areas in a co-op’s service territory are without electricity and there are only four or five crews available to restore the system, electric co-ops depend on other co-ops in their state and national network for assistance.

“It is a natural extension of who we are,” says Kent Singer, executive director of CREA. “Helping each other is something we do naturally as part of our co-op family and our culture.”

An agreement is one thing, but success means carrying it out effectively. To that end, electric co-ops rely on planning and shared experiences, says Dale Kishbaugh, CREA director of safety and loss control. Colorado’s electric co-ops spend time planning for disasters, talking through the what-ifs of problems and sharing experiences with each other as they meet regularly to keep procedures updated.

The response to the East Troublesome Fire came together relatively quickly after that fire took a turn and developed a speed no one expected. Once it burned through the system and MPE knew where it lost its lines, the response was quick but planned, with the idea that when mutual aid crews arrived the work could begin and materials would be available.

With other natural disasters, even with other wildfires, that planning can often start before the disaster actually strikes. For example, weather predictions can give a co-op notice of a possible blizzard or ice storm. Then materials can be readied and preliminary assistance can be arranged.

Another example is the Cameron Peak Fire, the largest fire in Colorado history, which ignited in August and was still only 92% contained at magazine deadline. While dangerous and, at times, unpredictable, it burned at a slower pace than the East Troublesome Fire. This gave Poudre Valley REA crews opportunities to prepare for where the fire might burn through its system.

Before the fire arrived, PVREA lineworkers wrapped poles in high-risk areas with fire protection materials. They met regularly with incident command to determine where the electric system might be affected and where the co-op might need to de-energize lines. Once the fire burned through an area and it was deemed safe to enter that area, PVREA crews and contractors got right to work replacing burned poles and restringing power lines. They were prepared and, this time, PVREA did not have to rely on the mutual aid agreement. But that agreement was there and could be used if needed.

No electric co-op has to go it alone. Each independent, local co-op is part of the electric co-op family, part of a statewide and nationwide network of electric co-ops, all ready to lend a hand to get the lights back on safely wherever they go out.

Mona Neeley is the publisher and editor of Colorado Country Life magazine.

Families are still facing the challenges of remote learning, but the town of Mancos is helping to reduce some of the burden for people who don’t have reliable internet access.

It was found that 20% of families in the Mancos school district were without reliable internet access at home. So the town of Mancos teamed up with FastTrack Communications to deliver free, high-speed internet from 6 a.m. to 10 p.m. daily at a local park. FastTrack will provide a 100 mpbs dedicated internet connection available to families and students who otherwise won’t have a connection to participate in remote learning.

This fall, Pueblo West-based electric cooperative San Isabel Electric rolled out its Empower program. This expansion of its energy-efficiency programs helps people create an energy-efficient home or business space with free energy assessments, net-metered home solar power systems, electric vehicle and charger rebates for consumer-members and products such as high-velocity, low-speed fans, electric water heaters, electric thermal storage and air source heat pumps, just to name a few. Many of these products and services can be bundled to maximize efficiency and energy savings.

According to an October press release, the San Isabel Electric Board of Directors said Empower is essential to continue the path of providing value for not only SIEA consumer-members but the entire southern Colorado region.

The USDA will provide funding to YVEA/Luminate through its ReConnect program to deploy a fiber-to-the-premises network. This will connect 264 rural households, 27 farms and ranches, 27 businesses, and three post offices to high-speed internet. With this funding, YVEA/Luminate will construct 200 miles of middle mile fiber to connect northwest Coloradans in Routt, Moffat and Eagle counties.