San Isabel Electric Association, based in Pueblo West, partnered with American manufacturer Titan LED to brighten the day — and space — of two businesses in the co-op’s service territory.

First Choice Market in Walsenburg received a $17,955 rebate check after it upgraded more than 450 light fixtures in the store. This not only increased the life span of the lighting up to eight times, but it gives the small business an average of $950 in monthly savings on its electric bill.

Valley Market is also saving money on its monthly electric bill, to the tune of $650. The business is grateful to be able to pass those savings along to its customers. The Colorado City-based market received a $9,675 rebate from SIEA. An additional added benefit is that the market is saving employee’s time and energy by no longer needing to replace expensive, old-fashioned lightbulbs that were frequently burning out.

SIEA points out that energy savings vary depending on building specifications, the scope of the project, overall energy usage and other factors, but it is eager to offer this program to commercial accounts in its territory. For more information on this and other rebate programs the co-op offers, visit siea.com/rebates.

Colorado electric co-op Sangre de Cristo Electric Association, Inc., announced that a 36-year site license agreement is in place for a new solar array project. They proceeded with construction and held a ground-breaking ceremony in September. The 2-megawatt solar array will be built on Colorado Department of Corrections property at the Buena Vista Correctional Facility, an innovative partnership that took 13 months of negotiations and considerations.

Once constructed, the array will generate about 5,752 megawatt-hours of energy, which is enough electricity to power about 685 typical homes in the service territory. juwi, Inc., was chosen to construct the solar facility, which continues over the next several months.

SDCEA will purchase all the power generated from the solar facility to supply to its consumers.
Unique positioning in a mountain valley influenced the co-op to choose a sun tracking system to maximize the output of the array. The array will only generate power when the sun is shining, thus reducing the need for solar-generated electricity storage.

As the project proceeds, SDCEA plans to announce the terms for the community solar garden aspect of the project that will benefit members. 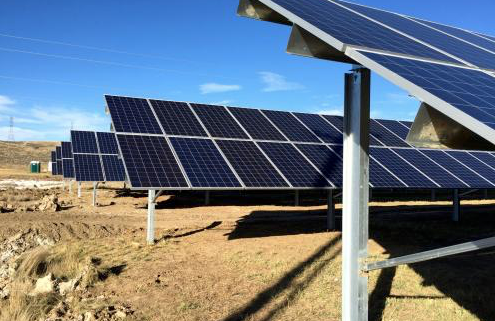 A proposal for a 30-megawatt solar array situated in Nucla has been submitted to Tri-State Generation and Transmission.

The solar array would be built directly into the Nucla-Maverick Substation in Montrose County in southwestern Colorado. This substation powers three lines across Colorado, including one to Telluride. The array would increase and provide local renewable energy for San Miguel Power Association and to consumers across its service territory.

The Nucla coal plant is slated to be shut down in 2022, and there is hope that this solar project will replace the coal plant energy output to the area. County officials support the project and expect the potential construction and installation to create new jobs for the area.

This proposal is currently being reviewed by Tri-State. CREA will continue to track the progress of and report on this potential project.

Recent winners had 91 energy efficient light bulbs installed in their home by MVEA representatives and they expressed gratitude for the upgrade, knowing that the LEDs will last longer and use less energy. This program brings awareness to MVEA’s community programs, promotes energy efficiency efforts and gets members involved with the co-op.