Every job comes with its own unique tools of the trade. For electric lineworkers, those tools include personal protection equipment (PPE) to keep them safe as they work in what has been listed as one of the top 10 most dangerous jobs in the country.

This PPE includes personally-fitted rubber insulating gloves and sleeves, along with blankets, insulating line hoses, fiberglass hot shot sticks, grounds and jumpers. Keeping this necessary equipment in safe condition, without tears or degradation, means it must be tested regularly. That testing is required by the Occupational Safety and Health Administration, but as Dale Kishbaugh, director of safety and loss control for the Colorado Rural Electric Association, puts it, “It’s the difference between them going home and not going home.”

For years, many of Colorado’s electric coops shipped their lineworkers’ equipment as far away as Kansas and Iowa for regular safety testing. Much of that equipment was purchased from Western United Electric Supply Corporation. Western United was created as an electric materials distribution co-op by Colorado’s electric co-ops in 1976. Today it has 67 member co-ops across eight states with warehouses in Brighton, Colorado; Salem, Utah; and Albuquerque, New Mexico.

Weekly supply shipments are sent to co-ops with materials needed for construction projects and other line work. However, Western United’s semi tractors then returned empty. That led Western United CEO Mike Prom to a realization three years ago: If WUE built a test lab at its main Brighton facility, much of the lineworkers’ personal protection equipment that was being sent across the country for safety testing could come back to WUE on those otherwise empty delivery trucks.

“We saw another opportunity to provide value to our members,” he said.

The idea to build a regional electrical rubber equipment test lab inside WUE’s Brighton building made so much sense that it was quickly accepted by the Western United board and by late 2015, it was up and running.

Within just a few months, the new test lab was busier than anyone expected. Greg Mordini, CFO at Western United, said that additional testing machines had to be purchased within the first year of operation to keep up with demand. “It’s been phenomenal,” he said. “We’re saving members a lot of money on freight, and the growth of the lab exceeded our wildest estimates.”

For Colorado’s co-ops, which test equipment much more frequently than OSHA standards require, having a trusted testing lab in their own state not only means savings and convenience, it also brings new peace of mind. “We’ve gotten a lot of positive feedback,” Kishbaugh said. “Rather than shipping it off to a location they have no idea about, they have a chance to tour the facility, and instead of being a number on a box, there’s actually a name and co-op to go with it. There’s a mutual respect both ways.” 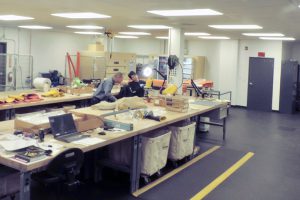 Mike Prom and a Western United employee examine a glove in the test center.

Western United’s development phase included visits to the highly regarded Cooperative Electric Energy Utility Supply test lab in South Carolina and the Colorado Springs Utilities test lab. It was important to Prom to look carefully at best practices and learn what does and doesn’t work, setting Western United’s lab up for success.

The lab sits in an enclosed area inside Western United’s facility with its own air and humidity control. A full-time lab coordinator and rotating shifts of employees keep testing operations running nine hours a day, five days a week. Shipments of lineworkers’ gloves, sleeves and tools arrive daily. With a total of 80 customer utilities currently, that adds up to approximately 70,000 pieces of protective equipment tested per year in the lab. Prom says a commitment to customer service is key. “People like our two- to three-week turnaround — we focus heavily on this,” he said.

Maintaining the highest possible level of testing efficiency and service requires specific processes and immense attention to detail, including a running track record for each glove tested in the lab. The glove owner’s name, testing dates and condition are all individually documented and the data is stored on Western United’s servers. 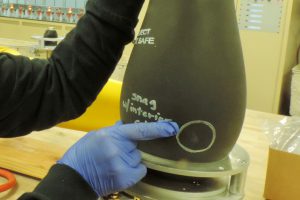 A test lab employee inspects a hole n a glove (circled in yellow).

The journey of a lineworker’s set of gloves through Western United’s safety testing is a multi-step process. After being washed, disinfected and dried using customized machines and cleaning agents, specially-built AC/DC electric machines with an energized water tank run a series of safety tests. Lab technicians then visually inspect the gloves by hand and place them on inflators to ensure no defects of any kind are present. Finally, the gloves are packaged in heat-sealed plastic for return to the lineworker. Included in that return package is a strong sense of pride from Western United’s lab staff for the work they do. “We test at a higher level than what is required,” Prom said. “That’s your life, that’s your family. It’s critical.”

In cases where a piece of equipment is found to be defective, replacement items can be easily provided from Western United’s extensive stock. “A lot of trust and faith is put in these labs,” Kishbaugh said. “If there’s any question at all, they’ll take that stuff out of service.” 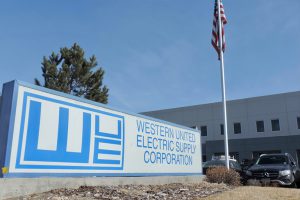 The Western United Electric Supply Corporation test lab is located inside its corporate office in Brighton.

“We got a very strong recommendation from them,” Prom said. With Western United’s Colorado test lab now being the only NAIL accredited lab in an 11-state region, it’s certain to attract even more co-ops and municipalities.

With such tremendous growth in its short time of operation, WUE is in the process of adding duplicates for each machine in the lab, so operations will not be affected should one ever need to be taken out of service. WUE is also adding lab technicians to keep up with demand.

In creating a respected regional safety test lab for its members, Western United’s goal of upholding cooperative principle six, “cooperation among cooperatives,” has been quickly realized and thousands of electrical lineworkers across the West are reaping the benefits.

Mary Peck is a Colorado freelance writer with an extensive background in the electric cooperative industry.

If you want to work where the action is, how about a job as an electric lineworker, keeping the electricity flowing throughout your community? Or, as a power use supervisor or member services representative, working with co-op members to find ways to reduce their electric bills by saving energy, utilizing renewable energy sources and making practical repairs around the home?

“The electric power industry is one of the great American success stories and provides high-quality jobs that empower our nation’s economic growth. Behind every wall outlet or light switch, there is a dedicated workforce focused on powering the lives of millions of Americans who rely on electricity for nearly everything they do,” said Michael J. Bradley, president and founder of M.J. Bradley & Associates that recently conducted the study Powering America: The Economic and Workforce Contributions of the U.S. Electric Power Industry.

The National Rural Electric Cooperative Association sponsored that study along with two other national utility groups to show how electric utilities power the economy as a result of lighting our homes and businesses.

A high investment on infrastructure
Powering America cites the utility industry as the most capital-intensive economic sector, investing more than $100 million per year on the nation’s electricity infrastructure with advances in technology, environmental protections and other improvements. That’s in addition to money spent on regular operations and maintenance.

All that adds up to supporting more than 7 million jobs. More than 2.6 million of those jobs result from direct employment, like utility employees and contractors. As all those people go to work and live their lives, they create another 4.4 million “induced jobs” such as teachers, doctors, real estate agents and service workers.

The report calculates the economic impact of the electric power industry at $880 billion, about 5 percent of the nation’s $18 trillion gross domestic product. The U.S. Department of Energy slices and dices those numbers a different way, shedding a little more light on wind-turbine technicians and other renewable energy jobs.

DOE’s second annual United States Energy and Employment Report released in January views energy jobs more broadly than just electric utilities. It includes careers in energy efficiency, mining and transportation, and concluded, “Rebuilding our energy infrastructure and modernizing the grid, diversifying our energy mix, and reducing our energy consumption in both our built environment and motor vehicles, America’s labor markets are being revitalized by our new energy and transportation technologies.”

Co-ops look out for the community
Those renewable energy jobs are in addition to a raft of other careers in energy, from mining, to energy efficiency, power plant operators, and social media and cyber security specialists. Jobs at electric co-ops especially offer openings in cutting-edge careers, said Michelle Rostom, director of workforce development for NRECA.

Lineworkers are always in high demand. Every year, Colorado’s electric cooperatives award scholarship opportunities to those looking into a career in linework. In 2017, a combined total of $384,000 in scholarships was awarded by several co-ops along with power suppliers Tri-State Generation and Transmission Association, based in Westminster, and Basin Electric Power Cooperative, headquartered in Bismarck, North Dakota.

“There are a lot of great opportunities at co-ops,” Rostom said, noting that electric co-ops expect to hire as many as 25,000 new employees in the next five years. “Electric co-ops are doing a lot of research on integrating solar power and wind with coal and other cutting-edge solutions. There are opportunities to be part of the next generation of the energy industry.”

Part of the reason those jobs will be available is that the large Baby Boom generation is retiring — Rostom said 6,000 co-op employees retired last year. Other parts of the energy industry went through that wave of retirements several years ago, but Rostom said it’s just catching up with electric co-ops. “People stay at the co-op for so long because they’re great jobs with interesting work, a chance to grow professionally in a lot of different areas and they have a strong connection with their local communities,” she said.

Electric co-ops formally addressed that need to hire more talent when NRECA set its six strategic objectives, one of which is to develop the “Next Generation Workforce.” In 2006, NRECA joined with other national groups to form the Center for Energy Workforce Development as a way of making sure jobs get filled with high-quality workers.

NRECA sees military veterans as part of the solution and began the Serve Our Co-ops; Serve Our Country veterans hiring initiative, which is another part of Rostom’s job as coordinator.

“Veterans have always been a core part of our co-op workforce and this program creates additional intent to hire more veterans,” she said. “Veterans are mission-oriented, disciplined and safety-focused. They show strong leadership capabilities and they work well under pressure.”

“There are a lot of parallels between the military and cooperative principles, like teamwork, autonomy, independence and community,” Rostom said. Colorado’s electric cooperatives succeed because of those same standards and are always looking for ways to ensure their communities thrive as well.