United Power recently installed a 625-kW diesel generator in its mountain service territory on the Gilpin County School District campus. This was done in partnership with the Gilpin County Office of Emergency Management.

The generator was installed by the Brighton-based electric cooperative to enhance safety for both the school and community members. Since the school district didn’t have a backup power option, Gilpin County was required to notify parents and send students home in the event of a power outage.

Not only will the generator help alleviate concerns for school administration and parents of students, Gilpin County Emergency Management can also activate the site as an emergency warming center during an extended outage in the area.

To launch the station, LPEA and Purgatory Resort hosted a ribbon-cutting ceremony on Wednesday, September 1.

“We are thrilled to have completed our portion of the statewide EV fast-charging corridor, which will allow EV drivers to traverse Colorado, from corner to corner, without range anxiety,” LPEA CEO Jessica Matlock said in a news release.

Installed with funds from Colorado Energy Office and LPEA, the station is open 24 hours per day and costs 30 cents per kilowatt hour. An idle fee of 30 cents per minute is also charged when a vehicle is left plugged in longer than 10 minutes after charging is complete. Unlike standard level 2 EV chargers, which take 3 to 8 hours for a full charge, level 3 DC fast chargers take less than 30 minutes. 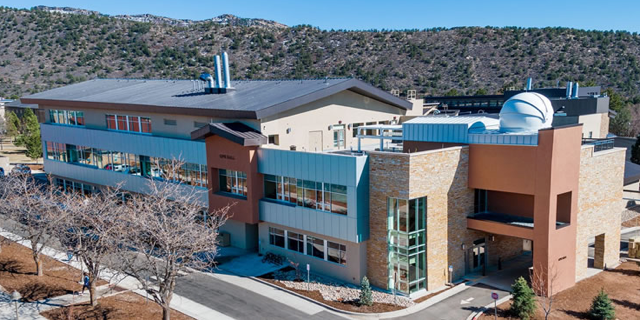 Durango-based Fort Lewis College celebrated the opening of the new Geosciences, Physics and Engineering (GPE) building. La Plata Electric Association and its members helped fund this building through an educational and special projects grant of $200,000 from Unclaimed Capital Credits.

LPEA staff engineer, Rachel Schur-Wagner says that Fort Lewis is cutting-edge and the opening of the GPE “Is providing incredible opportunities in engineering and the sciences.” Labs in the GPE are filled with the latest in high-tech equipment and spaces for students to be creative. Instead of listening to mass lectures, students work in small collaborative groups.

Dan Harms, LPEA manager of rates, technology and energy management says that Fort Lewis is a “great value to local companies” now that they can “home-grow” their own future employees in Durango.

Not only is the GPE building cutting edge, but with the new three-story building, Fort Lewis is able to expand its student base for their geosciences, physics, and engineering programs.

LPEA takes pride in the fact that they and their members had a hand in helping make this a reality for their local Durango community.

La Plata Electric Association, with offices in Pagosa Springs and Durango, works with members — both residential and commercial — to change out their lighting to new, energy efficient lamps. The cost to purchase new lighting all at once can be cost prohibitive, so the electric cooperative has been prudent with its members’ money as it too worked to change out lighting in all of its buildings.

Ray Pierotti celebrates the appearance of “daylight” in LPEA’s warehouse.

“This has been a steady process beginning in 2010,” says Ray Pierotti, LPEA’s project specialist who focuses on lighting technology. “We’ve got a number of buildings and different lighting applications, such as parking lot and exterior lights, in addition to regular office lighting. I’ve been keeping up with the technology and, as it made sense from a technology and budgeting perspective, we initiated the projects.”

LPEA’s administrative offices were steadily replaced and are now 100 percent LED. With the office light retrofits, energy-saving controls were also installed, including dimmers and motion sensors. Work lighting for office employees is greatly improved even with the energy savings.

Pierotti is perhaps most excited about the projects that replaced the lighting in the warehouses. Previously dimly lit with old technology, the warehouses now appear to be illuminated by daylight. “The difference is just amazing,” Pierotti says.

The total reduction in kilowatts with all the office space, warehouses, truck barns, exterior and other lights changed out is nearing a combined 100 kilowatts, which, according to Pierotti, saves the cooperative more than 260,000 kilowatt-hours in both locations and more than $30,000 annually going forward.

Just like all of LPEA’s commercial members who opt to change out their lighting and reduce their energy consumption, LPEA benefitted from rebates provided by its wholesale power supplier, Tri-State Generation and Transmission. Tri-State benefits by encouraging members to reduce energy consumption so the company doesn’t need to build additional generation facilities.

Fort Morgan-based Morgan County Rural Electric Association offers home and business energy audits to its membership at no cost. MCREA members who have questions about their electric bill or want to find ways to be more energy efficient can schedule energy audits at their convenience.

MCREA Member Services Representative Bill Annan conducts the energy audit by performing a walk-through of the home or business to collect information. An infrared camera may be used to assist in identifying building envelope weaknesses. Annan also reviews the member’s history of electric consumption and discusses the member’s concerns and goals of energy consumption. Once the audit is complete, members can assess priorities in their energy efficiency plan based on recommendations made by the auditor. 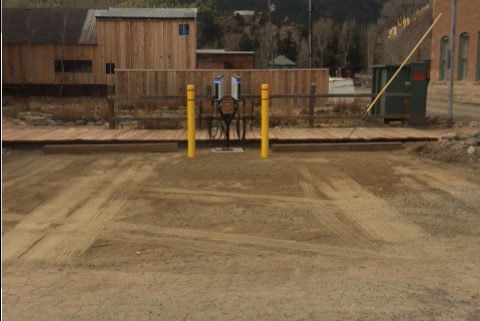 Charge Ahead Colorado promotes the use of electric vehicles and increasing electric vehicle charging station infrastructure around the state. The Gunnison-based electric cooperative partnered with the town of Lake City on the project. Lake City generously donated two parking spots on town-owned property and poured the concrete slab for the station. GCEA staff installed the station and performed some of the electrical work.

The central location allows electric vehicle owners the opportunity to charge their vehicle and walk short distances to the many shops and restaurants in Lake City and take in the beautiful scenery. The charging station is the same model as the stations located in Crested Butte and Gunnison, which offers ease of use and familiarity for electric vehicle owners traveling in the area. (The city of Gunnison owns the station located in downtown Gunnison and also received a grant to help pay for that station.)

GCEA is proud to offer another resource to allow electric vehicle owners opportunities to travel with confidence between communities, promote clean energy technologies and encourage the use of more electric vehicles in the area. 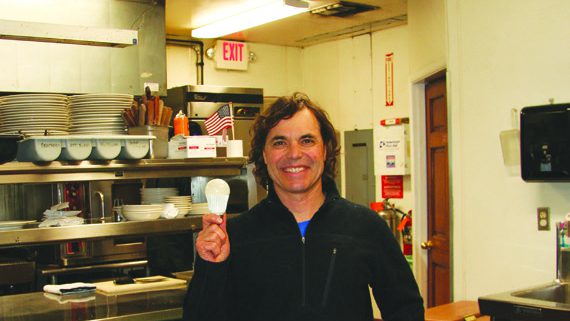 “I’m more ecstatic about lightbulbs than I ever have been in my life,” says Gelose, who celebrates 20 years as owner of The Palace this year. “With all the money I’ve spent in improvements over the years, it’s the new lighting I get the most joy from.”

With more than 7,000 square feet of space, including two dining rooms, the tavern, three kitchen areas, restrooms, an extensive patio and a full basement of nooks and crannies, the lighting solutions spanned the gamut. The retrofit took three years due to availability of products and bottom line costs.

“My first LEDs were the stringer (holiday) lights outside. Then I replaced all my incandescents,” Gelose says. “Next was the fluorescent lighting in my kitchen. I can’t tell you how much time I’ve saved not going back and forth to the store to get new bulbs – and that doesn’t even consider installation time.”

Project specialist Ray Pierotti, from La Plata Electric Association, the local electric cooperative, says that The Palace kitchen is probably one of the best lit in Durango. The new LED fluorescents already led to increased productivity, enhanced visibility for cleaning and safety, and reduction in air conditioning because LED lights emit little to no heat.

In the dining areas and tavern – which were the last rooms to completely retrofit as decorative lighting is just coming to the market – the light is now uniform, consistent and pleasing for patrons.

Gelose solved previously problematic lighting issues. For example, the stained glass skylight units that require three or four employees to remove the glass just to replace the lights now have LED strip lighting. With a much longer lifespan than incandescents, that laborious task won’t come around again for a long time.

“In 20 years, for the most part, these have never been lit up, so now all these beautiful stained glass skylights can shine at night and last for the next 20 years,” Gelose says.

LPEA projects that Gelose’s annual electric bill will be reduced by an estimated $5,000. Gelose adds, “Even if the finances were a wash, I’m happy.”

Over the years, LPEA gave more than $750,000 in LED rebates – which come directly from Tri-State Generation and Transmission – to 525 commercial customers who reduced energy consumption by nearly 3 megawatts.

Gunnison County Electric Association, based in Gunnison, offers several options to its member-owners to help them become more energy efficient. GCEA and the town of Crested Butte installed a community solar garden where members can lease a 250-watt solar panel. Each panel is expected to produce 1.3 kWh per day. In addition, the electric cooperative offers:
• Free home energy audits
• Rebates on LED lights
• Rebates on energy efficient appliances
• Assistance with efficient lighting in commercial buildings
• A Prepay Program

GCEA members can also go green by participating in its Green Power Program. The program gives members the choice of powering their homes with clean energy. GCEA purchases green power at a premium from its power supplier, Tri-State Generation and Transmission, and passes the cost of green power to participating members.

Electric co-ops in Colorado will be partnering with the Colorado Energy Office, which recently announced a $1.1 million U.S. Department of Agriculture award to help finance energy efficiency improvements for Colorado farmers.

The award comes through USDA’s Natural Resources Conservation Service’s Regional Conservation Partnership Program and is matched through a $1.3 million cash and in-kind combined contribution from CEO, the Colorado Department of Agriculture and utility and industry partners such as Colorado’s electric cooperatives. The funds will help finance energy and water saving projects identified through CEO’s Colorado Dairy and Irrigation Efficiency Program.

Over the two-year grant period, the efficiency improvements are expected to achieve more than 5,250 megawatt-hours of electricity savings and 524,000 gallons of water savings annually.

The electric co-ops were an integral part of the program when it was launched in 2015 in territory served by Morgan County Rural Electric Association and Highline Electric Association. Its purpose was to provide agricultural producers free energy audits and technical assistance designed to select and implement cost-effective improvements that will reduce energy, water and operating costs.

So far, 63 producers have participated and 2,800 MWh of potential electricity savings have been identified through the audits. The program will expand to 200 producers during the next two years and is expected to generate more than $4.5 million in potential savings in only five years.

Colorado’s agriculture industry faces direct energy expenses of more than $400 million annually that account for 7 percent of the industry’s overall expenses, according to CEO’s 2013 Agricultural Energy Market Research Report. The report identifies 90,000 MWh of potential electricity savings annually and identifies dairies and irrigators as the most energy intense sectors with the greatest opportunity for savings.