When it’s time to fuel up your vehicle, you’re likely heading to the gas station or an electric vehicle charging station like most drivers in the U.S. But those might not be the only options in the future.

Research continues into alternative vehicle fuels, including hydrogen and biodiesel. This shift away from gasoline-powered vehicles comes with several benefits, including improving the country’s energy security and lowering vehicle emissions.

Hydrogen as fuel
One of the alternative ways to power a vehicle is with hydrogen in the form of a fuel cell. This form of fuel is potentially emissions-free and can be produced using domestic resources, according to a panel discussion at CREA’s October Energy Innovation Summit. 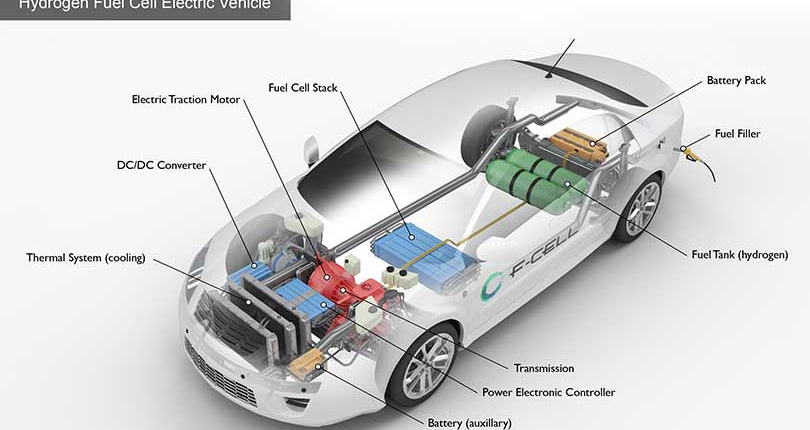 The only byproducts of this process are water and heat, emitted in the form of water vapor and warm air. Since the byproducts are clean, vehicles powered by hydrogen fuel cells produce no tailpipe emissions and are classified as zero-emissions vehicles.

Extracting the hydrogen itself can be a carbon-free process, depending on the way it’s done. One way is to perform electrolysis is using water to extract hydrogen, which requires power from another energy source. Using renewable energy, such as solar or wind energy, to power electrolysis provides a carbon-free process to extract the hydrogen. (There are other hydrogen sources that are less sustainable, such as producing it from natural gas, which emits carbon dioxide as a byproduct.)

Advantages of hydrogen-powered vehicles include fast fueling, long cold-weather range and high cargo capacity. With hydrogen, drivers can refuel a vehicle in under five minutes and gain more than 300 miles of driving range.

However, there are currently only a limited number of hydrogen refueling stations in the U.S., and most of these stations are in California. Colorado’s lone public hydrogen fuel station was installed at Colorado State University in Fort Collins in 2020. It is maintained by the CSU Energy Institute at the Powerhouse Energy Campus on North College Avenue.

It generates hydrogen on-site and is used to train students in hydrogen technology and by researchers gathering cost and operational data as they work toward future hydrogen station deployment for commercial operators in Colorado.

Biofuel/Biodiesel
Another form of alternative vehicle fuel is biofuel. Renewable biofuels are produced from biomass, which can be used in conventional gasoline- or diesel-powered vehicles. These fuels work in the same way gasoline or diesel does by fueling compression-ignition engines. Almost all diesel vehicles are capable of running on biodiesel blends, although vehicle owners should check their OEM engine warranty to ensure that higher-level blends of this alternative fuel are approved by the manufacturer.

One of the most common biofuels is ethanol, which is produced from sugars in corn or other grains, like sugar cane, sugar beets or rice. Sometimes biofuels can be blended with gasoline or diesel, or they can simply be used in pure form. Almost all gasoline sold in the United States includes 10% ethanol blended into the fuel, mostly from distilled corn. Scientists are currently working to find new ways to expand ethanol production by experimenting with different plants. 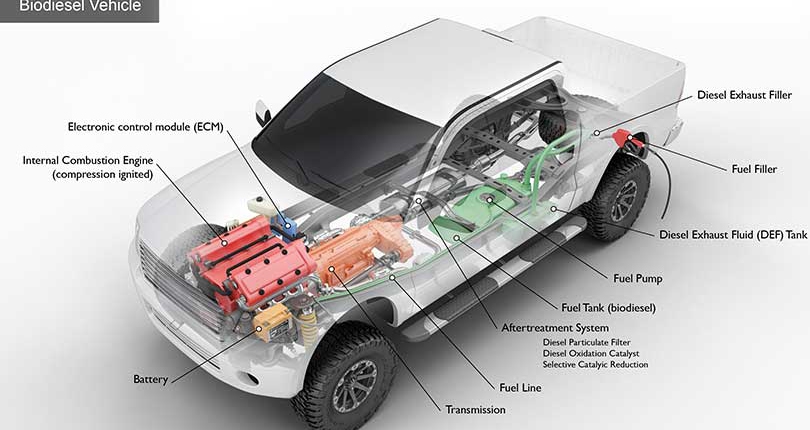 Biodiesel, a different form of biofuel, can be produced from vegetable oil, animal fats or recycled cooking grease, and can be used to power older cars that run on diesel. Since biodiesel is nontoxic and biodegradable, it is much safer than petroleum diesel if it’s released into the environment.

The most common sources for biodiesel production in the U.S. are soybean oil, corn oil and recycled feedstocks. There are several other nonmainstream biodiesel sources that can be manufactured from algae, municipal waste and wood chips. However, these options are much less common. The most common biodiesel blend is B20, which ranges from 6% to 20% biodiesel blended with petroleum diesel.

These alternative vehicle fuel options may not be mainstream yet, but as they come on line they can help lower our reliance on gasoline and diesel. As a bonus, these clean-burning options help to improve air quality and lower greenhouse gas emissions from the transportation sector.

There is great potential to see these alternative fuels expand over the years, and additional research efforts may help these fuels reach more individual consumers nationwide.

United Power recently installed a 625-kW diesel generator in its mountain service territory on the Gilpin County School District campus. This was done in partnership with the Gilpin County Office of Emergency Management.

The generator was installed by the Brighton-based electric cooperative to enhance safety for both the school and community members. Since the school district didn’t have a backup power option, Gilpin County was required to notify parents and send students home in the event of a power outage.

Not only will the generator help alleviate concerns for school administration and parents of students, Gilpin County Emergency Management can also activate the site as an emergency warming center during an extended outage in the area.

Well, the new microgrid was officially unveiled earlier this month on October 7.

It consists of three main parts: a 140-kilowatt/446-kilowatt-hour Tesla Powerpack battery, a solar photovoltaic array and a 130-KW propane generator. Working together, these three assets meet the definition of a microgrid, as defined by the Department of Energy:  A group of interconnected loads and distributed energy resources that act as a single, controllable entity with respect to the electric grid.

Red Feather Lakes is vulnerable to wildfires, high winds, winter storms and car accidents on its winding mountain roads — all of which can take out a power line and cause extended outages. The microgrid is expected be able to provide the community up to 8 hours of electricity when other parts of the grid are unavailable.

The microgrid serves Red Feather Lakes community members, the library, a post office, local businesses and more. Community members and critical services such as fire response, EMS and telecommunications will experience better energy management and increased resiliency and reliability thanks to this innovative project.

Coming together with the small, isolated mountain community, Poudre Valley REA is proud of this community-focused initiative made possible with support from its power supplier, Tri-State Generation and Transmission, and other national partners.

Select homes in the Animas View Mobile Home Park are now qualified to receive free installation of an air-source heat pump water heater and other energy efficiency measures, such as LED lighting, low-flow faucets and showerheads, and window and door weather stripping.

In addition to being remarkably efficient, the installed air-source heat pump water heaters will run on a schedule that avoids expensive peak power consumption. During times of peak electricity demand, LPEA will be able to remotely manage these water heaters, although this is expected to be a rare occurrence. This will not impact member homes (as water heaters store enough hot water for these short periods), and it will help LPEA avoid the purchase of expensive “on-peak” power from its power suppliers.

LPEA CEO Jessica Matlock said in a recent news release, “This innovative project will allow LPEA to test the viability of grid-integrated technologies to manage our local power demand.”

Participation in this program is voluntary, and the total number of homes included will depend on the matching funds LPEA is able to secure from other partners. This program will improve energy efficiency and is sure to reduce utility bills for residents. Installations are expected to begin February 2022.

Computer hacking is a top news story these days, and for years electric cooperatives have focused on blocking cyber threats from interfering with the nationwide electric grid of wires and poles that keeps our lights on.

The network of power lines, transformers and substations adds up to an incredibly complex system that reliably brings us the conveniences of modern life. That network is transforming into a “smart grid” these days. It’s adding renewable energy sources such as solar and wind, which call for sophisticated software to keep power flowing at night or when the wind isn’t blowing. Computer algorithms react with the most efficient and reliable operations when forecasts call for storms, wildfires or times of high-power use.

Making such modern miracles happen means joining with another dominant part of today’s world: the internet.

The blink-of-an-eye speed of balancing the generation of electricity with your flip of a light switch relies heavily on the electronically-connected world. The internet is incredibly useful, but also a target of troublemakers — from lone, self-taught experts to international crime rings.

Electric utilities know this and work every day through their own offices and national organizations on cyber safety.

You can take smart steps too, to protect yourself and the electric grid. Because the power grid uses the internet, that means any of your internet-connected devices are also part of the grid: computers, security cameras, printers, smart TVs, health monitors — even cars and lightbulbs can be connected to the internet.

Here are the top ways you can defend against hackers:

Lock the front door.
If you have wireless internet in your home, the traffic comes in through the router. If you take just one step, create a strong password for that router, and set a reminder to change the password regularly.

Use a secret code.
Weak passwords make things easier for hackers. Use combinations of uppercase and lowercase letters, combined with numbers and special symbols like “&” or “!”.

There are apps to help you remember passwords. A simple notebook can also work, as long as you never lose it and no one else has access to it. And be aware that every major internet-connected appliance comes with its own factory-installed password you should change right away.

Stay vigilant.
If you receive an email with an attachment you aren’t expecting, don’t open it. If you get a message with a link you didn’t know was coming, don’t click it. If the message is from a friend, phone and ask if they sent it — hackers can send messages using your friend’s address.

Stay state-of-the-art.
Your computer and other devices regularly offer updates — install them. They often contain security updates to protect against the latest cyber threat, so consistently check emails or messages saying you need to download an update. Go online and check any updates to your device to ensure they are authentic.

October is National Cybersecurity Awareness Month, and the U.S. Department of Homeland Security has titled this year’s theme, “If you connect it, protect it.” That’s good advice for your home — and for the electric grid.