Access to reliable electricity is top-of-mind for CREA and its member electric cooperatives. But natural disasters such as wildfires and winter storms can affect that reliability by taking down electric infrastructure and isolating rural areas (sometimes for long periods of time).

Two projects exemplify how Colorado’s co-ops are implementing microgrids, which are autonomous energy systems that serve specific areas and provide backup electricity with common-sense solutions when needed in emergencies. Poudre Valley Rural Electric Association in Fort Collins went live with a microgrid in Red Feather Lakes in October. Holy Cross Energy in Glenwood Springs is moving forward with another microgrid project on the Western Slope.

Red Feather Lakes is 60 miles away from PVREA’s headquarters. Historically, it has been prone to disasters that have major impacts on its single transmission line bringing electricity to the town. High elevation, heavy snowfall, dangerous winter driving conditions, fallen trees, wildfires and even tornadoes put this mountain town at risk for losing power.

PVREA leaders decided to create a microgrid after the local library won a grant to install solar panels and a battery to improve resiliency and cut electricity costs. The microgrid was installed at the local fire station, which has diesel generators and is located across the street from the library. PVREA controls the microgrid and owns the 140-kilowatt/448-kilowatt-hour battery. Now in place, the microgrid will provide secondary power for several hours if a disaster occurs.

“This project is rooted in community, which is a huge part of who we are as a cooperative. The Red Feather Lakes community came together to solve a need and approached us with the project. As we learn more about this microgrid, we can share that information with other cooperatives across the nation so that we all may better serve our members,” said Sam Taggart, strategic communications director for PVREA. 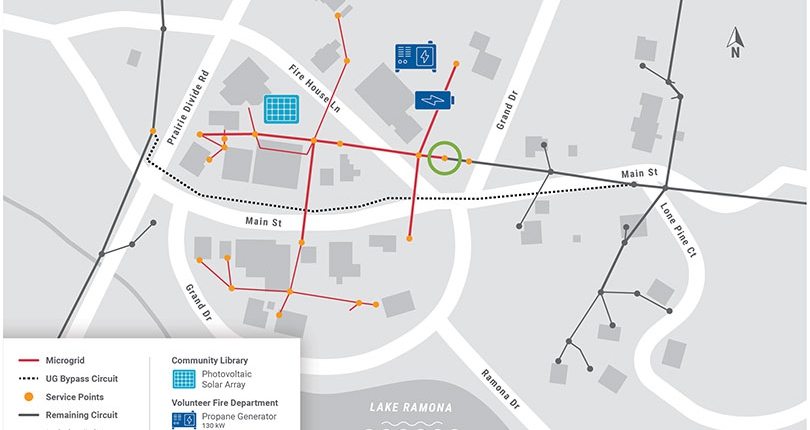 The small community in northern Colorado gets its electricity delivered by a single transmission line and will benefit from its new microgrid if that line goes down.

The project also would not be possible without the assistance of PVREA’s partners. The National Rural Electric Cooperative Association led the initiative in Red Feather Lakes, which is one of four microgrid projects involving five co-ops nationwide. NRECA connected the co-ops with a U.S. Department of Energy project, which provided $1.3 million in energy storage grants. Pacific Northwest National Laboratory and Sandia National Laboratories are also partners in the project. In addition, PVREA’s board of directors provided matching funding for its microgrid.

“The partners we had on this project were extremely important to us. We could not have completed this microgrid without our local, regional and national partners,” Taggart said.

HCE is also making headway with the creation of a microgrid system. The electric co-op is working on a feasibility study with Pitkin County and the Roaring Fork Transportation Authority to determine the practicality of a microgrid connecting a cluster of public facilities near the airport. The microgrid would be powered by renewable energy, independent from the larger electric grid. These facilities, which include the Aspen-Pitkin County Airport, the county’s public works facility, and RFTA’s bus barn, also would be protected from outages if service to the rest of the area is temporarily compromised by an outage. The feasibility study is funded by a $200,000 grant from the Colorado Department of Local Affairs.

With most of the research completed, HCE is looking ahead and fully anticipating making the microgrid a reality.

The urgency to create a microgrid in HCE territory emerged after the Lake Christine Fire in July 2018, which scorched more than 12,500 acres. The wildfire shut down power to the Upper Roaring Fork Valley, which includes the towns of Aspen, Snowmass Village and Basalt, with a year-round population of around 18,000. Three out of the four transmission lines running into Aspen were disabled and if the fourth line had gone down, it could have led to days or even weeks without electric service. This is not a possibility HCE is willing to face again for its members.

With the research phase of the microgrid project nearly complete, HCE is busy planning the next steps and the next phase of the project. Several grant opportunities are in the approval process, including one from the Colorado Department of Local Affairs. HCE will also cost-share part of the project, with funding going toward staffing needs and a protection plan to ensure the main grid is still being protected.

“Microgrids are really good on ‘black sky days’ and serve as a secondary source of power during a crisis. But there is also a great benefit to the grid on ‘blue sky days,’ and there is value in adding these batteries,” said Chris Bilby, research engineer for HCE.

“By installing a microgrid, we are actually going back to the old days. Many mines and train stations used to operate on microgrids, but because of the pollution, these transmission factories were moved farther away from populated areas, so people didn’t have to breathe that bad air in. With a clear path to clean energy in the near future, we can now move these microgrids back to communities,” Bilby continued.

In the face of a crisis, and especially when it threatens the resilience of the electric system, CREA and its electric cooperatives are working with their communities and other partners to find solutions. PVREA and HCE are examples of what it means to lead and overcome challenges to make reliable electricity readily available, despite any circumstance. Microgrids were the way of the past and now are an important step toward the future.

Sarah Smith is a freelance writer with a fondness for Colorado’s electric co-ops and the rural areas they serve.

Earlier this month, Y-W Electric Association installed a ChargePoint EV charger in Akron. A ribbon-cutting ceremony was held November 12 to celebrate this innovative step that supports EV infrastructure development on the eastern plains. The co-op’s goal is to “encourage more folks to obtain EVs, to contribute to the charging infrastructure to reduce range anxiety,” according to Y-W Member Service Manager Andy Molt.

The charger installation was made possible with funds from a Charge Ahead Colorado program grant through the Colorado Energy Office and funds from Tri-State Generation and Transmission, the electric co-op’s power supplier.

The innovative, hybrid model bucket truck uses battery power to raise and lower the bucket as well as the bucket jib. It was debuted in September by the Brighton-based electric cooperative at the 2021 Utility Expo in Louisville, Kentucky.

The electric boom and jib (a small crane attached to the bucket, allowing line crews to lift heavy materials up to bucket height) provide a cleaner, quieter idle time. Not only does this save diesel fuel and reduce emissions, it will improve safety conditions for line crews, according to United Power Fleet Manager Bill Hottell. He said in a recent press release that it’s a safer option than a traditional truck because the bucket crew will have an easier time communicating with the ground crew without having to compete with the noise of an idling diesel engine.

The hybrid truck is assigned to the Carbon Valley Service Center to respond to outages on the west side of United Power’s service territory. People in the community can identify this new truck as the hybrid model because it was branded with green lightning graphics on the side.

Under a 25-year power purchase agreement, energy from this project will be sold to Holy Cross Energy. The Glenwood Springs-based electric cooperative estimates this solar site will generate enough electricity to power about 900 homes and will give consumer-members of the co-op access to locally-generated renewable energy.

HCE President and CEO Bryan Hannegan stated in recent press release that this project “is an important step on our journey to 100% clean energy.”